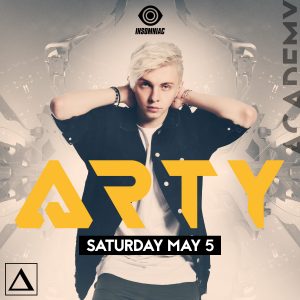 Famed DJ/Producer and EDM heavyweight ARTY has built an international following mixing his trademark big-room anthems with downtempo electronica year over year, showcasing his gift for translating club-focused sounds to the pop/radio format.  With nods to classic trance, Arty also produces under the progressive trance-focused moniker ALPHA 9, and is currently wrapping up a United States tour. With an XS Encore Las Vegas residency under his belt, and a pedigree of performances at Ultra, Electric Daisy Carnival, Tomorrowland, Ushuaïa, Amnesia Ibiza, and Creamfields, Arty has established himself as one of the music industry’s most consistent artists, a prodigious  talent, and has become a go-to for others artists, crafting immensely popular remixes for Halsey, OneRepublic, London Grammar, Above & Beyond, Porter Robinson, and Years & Years.

As a leading influence in the music scene and top 25 DJ, Arty continues to capitalize on cross-genre success while also hosting his own weekly Sirius radio show, Together FM, syndicated internationally across 35 countries, with over 5 million weekly listeners. Always pushing forward, Arty has several new works of original music and collaborations set for release later this year. This summer he toured in Asia, and played sold out shows in Ibiza with Martin Garrix and Armin van Buuren. This fall he will be playing at the Dreamland festival and Groovecruise LA, with more dates to be revealed.