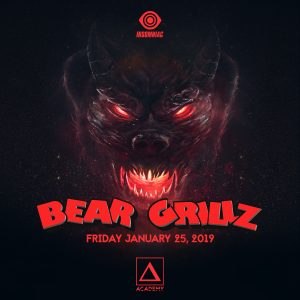 Originally more secretive and still sillier than Deadmau5, Bear Grillz is a disguised EDM producer who claimed to be a bear that found a MacBook Pro while wandering around Yosemite National Park. Bear Grillz began to build an amused club and festival following with releases such as The High Grade EP (2013) and the Datsik co-production “Fuck Off” (2015), as well as Mo Honey Mo Problems (also 2015), which registered on Billboard’s Top Dance/Electronic Albums chart. Since revealing his identity on The Jerry Springer Show, Bear Grillz has gleefully continued with EPs and singles such as This Is Your Brain on Dubstep (2017) and “Take Off” (2018).

The bear-suited producer debuted in 2013 with The High Grade EP, which featured a bear on the cover smoking a joint and giving the world the middle finger. Live DJ sets in full bear costume followed, then in 2014 he released the EP Now That’s What I Call EDM, although it was later reissued as They Made Us Change the Name. Datsik and others collaborated on the 2014 EP Bear Grillz & Friends, Vol. 1, and Vol. 2 arrived in 2015 along with the solo EP The Unbearable and Datsik co-production “Fuck Off.” The puns continued as 2016 saw the DJ hit with the Fuck Bitches Get Honey EP, which was also released with the alternative title Mo Honey Mo Problems and scraped the bottom of Billboard’s dance/electronic chart. That May, Bear Grillz unmasked himself as “RJ” (short for Robert James Pangelinan) on an episode of The Jerry Springer Show and continued with “Gurlz” off the Shellshock Kamikaze compilation. Stray tracks and the EPs This Is Your Brain on Dubstep and Half Man Half Bear arrived throughout 2017. The next year, similarly irreverent tracks — the Sullivan King collaboration “Wicked” and Blake Webber collaboration “Take Off” among them — were released individually.