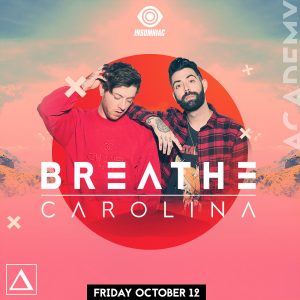 The multifaceted Colorado-based unit Breathe Carolinadebuted in the late 2000s with a genre-mashing EDM/post-hardcore/electropop sound, breaking through with the 2011 single “Blackout” from their third album, Hell Is What You Make It.

Founded in 2006 by Kyle Even and David Schmitt, the Denver group’s blend of synth-based beats and melodic screaming first appeared on the public radar in 2007 with the self-released Gossip EP. It was followed in 2008 by the band’s first full-length for Rise Records, It’s Classy, Not Classic, which featured all the tracks that appeared on Gossip with six additional new songs. Hello Fascination was released in 2009 and peaked at number 43 on the Billboard 200, and in 2011 the group released its third full-length, Hell Is What You Make It, home to the breakthrough single “Blackout.”

Though founding member Kyle Even left the group in 2013 to focus on being a parent, Breathe Carolina would continue without him, eventually releasing a fourth album, Savages, in 2014. The set recruited guests Karmin, Danny Worsnop(Asking Alexandria), and Tyler Carter (Issues), and featured the singles “Collide,” “Bang It Out,” “Sellouts,” and “Savages.” The following year saw the release of a new single, “More Than Ever,” a collaboration with Ryos featuring vocalist KARRA. It was issued via the Dutch indie Spinnin’ Records.

Over the next year, Breathe Carolinahad a prolific streak, releasing a bevy of high-profile singles and a pair of EPs in 2016’s Sleepless and Oh So Hard. They collaborated with artists like Blasterjaxx, APEK, Haliene, and more. Another EP, Coma, again for the Spinnin’ label, arrived in 2017. The following year, they issued the sequel EP Oh So Hard, Pt. 2.