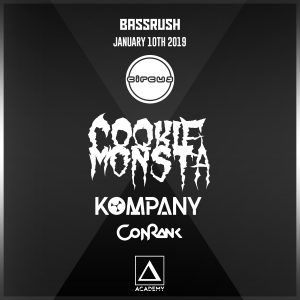 Cookie Monsta aka Tony Cook is a producer and DJ from Nottingham, UK who represents the loud and grimy side of dubstep. “If you crave the downright nasty dubstep then Cookie Monsta’s your guy. Packing a recipe of face-slapping snares, ground shaking bass and eye gougingly dirty synths … his sound resembles that of a demonic bass-saw that easily lacerates the ear drums of all it encounters.”

As a child Tony spent hours on his brother’s Playstation creating sounds on Music 2000. This inspired him to study music technology at college and it was here that he was introduced to Reason software, which he was, before long, to use to such devastating effect.

Always attracted to the dirtier sides of music, whatever the genre, he was caught off guard by Rusko’s upbeat style on hearing ‘FabricLive 37’ and became instantly hooked. He began to make dubstep-style tunes, random beats with a grime sound.

After rocking the place out with his first ever performance at a college end of year gig, the buzz he got was so amazing that he began to concentrate seriously on his music – and Cookie Monsta was born.

His barbaric basslines and grimy style quickly started to generate interest, and soon he had hooked up with Flux Pavilion. Intrigued by Tony’s ability to create unique and mystifying noises, Flux invited him to join Circus Records, and Cookie Monsta officially entered the world of dubstep with his first release, ‘Ginger Pubes / Blurgh!’.

Next invited to remix Taio Cruz’s pop tune ‘Dirty Picture’ ft Ke$ha, Cookie successfully switched the tune from pop to gritty by adding his trademark bassline. Further releases followed including ‘Fat Girl Rodeo’ on the Circus Records ‘Beats and Pieces’ EP, and a number of remixes such as ‘Supafly’ on Hard2Beat Records.

Cookie got the opportunity to showcase his talents on the decks for the first time ever in public on the Circus Records Takeover on GetDarker TV. And with ‘Ginger Pubes’ becoming an anthem for dance floors all over the world it wasn’t long before Cookie was DJing around the world.

All Cookie Monsta wants is to have a good time, and he wants you to enjoy yourself too, so with world domination on his to-do list, watch for a visit to a town near you soon, join in, have a laugh and brock out.