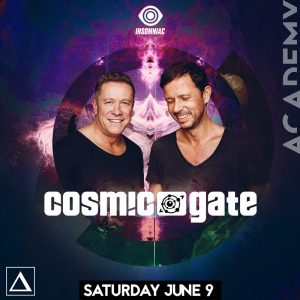 First they woke your mind… now START TO FEEL! From Cosmic Gate’s very first drumbeat through to ‘Start to Feel’ – their new convention-challenging long-player – they’ve proved to be the perfect alliance of musical minds. A by-chance meeting in a Cologne recording studio in the late-nineties set Nic Chagall and Bossi on the course to becoming Germany’s most successful and enduring electronic music duo. Their original productions have thrust them to the highest reaches of download charts & streaming lists, whilst their remixography has included everyone from scene legends like Armin van Buuren to revered Hollywood composers like James ‘Avatar’ Horner.

Nic & Bossi’s behind-decks-brotherhood has now created floor-frission at an uncountable number of countries. They’ve sold out arenas, conquered electronic music capitals, spun at a litany of major festivals and 10 years into their career became the highest climbers on DJ Mag’s Top 100 chart. Driven by their critically applauded albums, club-busting singles  (incl. ‘Not Enough Time’, ‘Body of Conflict’, The Theme, So Get Up and ‘Falling Back’) and scene-defining classics ‘Be Your Sound’, ‘Fire Wire’ and ‘Exploration of Space’, their place in electronic music’s hall of fame has long since been locked.

As DJs, feeding off each other’s turntable creativity, Cosmic Gate continues to push floors to supernova around the globe. In North America they’ve smashed the EDC, Electric Zoo and Nocturnal festivals and road-blocked clubs and events including Bal En Blanc & Guvernment (Canada), ASOT650 at Ultra, Pacha & Governors Island, NYC and their Marquee, Las Vegas residency. Similarly floors have been shaken in other hotspots worldwide, Tomorrowland, Belgium, ASOTs worldwide, Zouk, Singapore, Global Gathering, UK and Future Music Festival, Australia being but a handful). They sold out a 2000 capacity solo gig on Hawaii, as well as the Cosmic Gate Wake Your Mind In Concert events at the LA’s Palladium and Melbourne’s Festival Hall venues, each one hosting close to 4000 fans.

The summer of 2014 sees them approach one of their busiest festival seasons to date, as they play shows including Tomorrowland, Ultra Europe, Electronic Family, Global Gathering, SW4, and Creamfields. It will also see Cosmic Gate further expand their Ibiza appeal, branching out to play Space and returning to spin at the A State Of Trance nights at Ushuaïa.