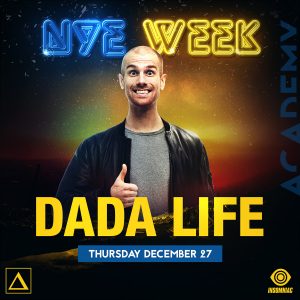 With a sense of humor as big as their bass drops, Swedish duo Dada Life separated themselves from the EDM competition as they rose to fame during the 2010-2011 season. Stockholm-based DJs/producers Olle Corneer and Stefan Engblom came together in 2006, combining pop-leaning electro sounds (the “Life” bit) with absurd slogans — “Bass don’t cry,” “Never bring your brain to a rave” — and an over-the-top attitude that reflected the avant-garde art movement of the 1910s and ’20s (“Dada”). Their single “The Great Fashonista Swindle” (2006, Pickadoll) parodied the Sex Pistols with its artwork, “The Great Smorgasbord” (2006, Southern Fried) introduced their love of processed meat, while “Do the Dada” (2007, Alphabet City) introduced their love of being self-referential, but all of them would fill the floor wherever slick electro was welcomed. They went official in 2009 with their debut album Just Do the Dada, released by the Hussle label and featuring track titles like “Don’t Snort the Yellow Snow” and “So You Wanna Be a Prankster?” A tour followed introducing Europe to their kinetic live show where inflatables flew through the crowd, while booking agents were forced to “Do the Dada” themselves, as the duo’s tour rider stated that the backstage area must be filled with champagne and bananas, or the venue was punished with a tech-house set, all tracks being 188 BPM or below. The year 2010 saw them touring with Tiësto, remixing everyone from Kylie Minogue to Chickenfoot, and collaborating with Dimitri Vegas, Like Mike, and Tara McDonald for the hit, “Tomorrow (Give In to the Night).” In 2011 they headlined the Electric Daisy Festival in Los Angeles — augmenting their set with a live marching band — dropped the hit “Kick Out the Epic Motherf*&cker” single on their own So Much Dada label, and released their computer audio plug-in, the Sausage Fattener, allowing fellow laptop producers access to “sausage fat” bass. Their new logo, two bananas forming a crest around a champagne bottle, debuted on their 2011 single “White Noise/Red Meat” and was featured on their sophomore album, 2012’s The Rules of Dada.