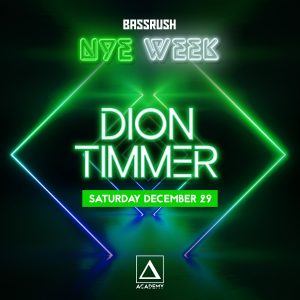 Bright, glowing lines shimmer through dark and hazy atmospheres in the futuristic world of Dion Timmer, an artist whose longtime roots in the Netherland’s rave scene have helped define his uniquely colorful and cinematic approach to modern bass music.

Having discovered Dubstep at the age of 10, Dion has matured beyond the realm of prodigy and blossomed into a seasoned producer with a huge range of eclectic influences. His latest releases feature highly cinematic blissed-out chord progressions and pitched up vocals alongside aggressive and highly technical sound design.

Dion’s vibrant-meets-vicious signature sound began to take shape through releases on Rottun Recordings (Plug Me In and My World EPs) followed by collaborative works on Excision’s 2016 Virus album, including festival staples “Final Boss” and “Harambe.”

His 2017 Textacy EP unearthed divergent new sounds and lush melodic influences, premiering an evolved live set experience at both Lost Lands Festival and opening for the 2018 Excision Tour for the 2nd year in a row.

After collaborations under his belt from the likes of Snails, Bro Safari, Datsik, Adventure Club and of course Excision, a packed tour schedule and a massive ascent into the realm of headliners from a young age, Dion has come into his own as a major force in bass music.