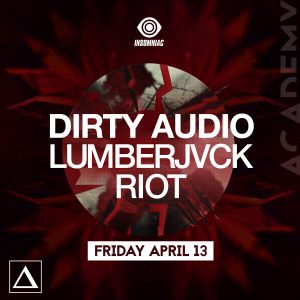 D!RTY AUD!O is a young, rising star in the electronic dance music scene. A Los Angeles native, D!RTY AUD!O discovered EDM at the age of 12, and it was only a matter of time before it became his true passion. In 2011 he began producing and has gained rapid support ever since.

In 2012, D!RTY AUD!O began touring, playing sold out shows across the US, and in 2013 began touring internationally.  Fusing electronic elements with Hip-Hop, D!RTY AUD!O has gained support from artists such as Diplo, Deorro, Carnage, UZ, Flosstradamus, Adventure Club, Krewella, Sidney Samson, Dillon Francis, Steve Aoki, DJ Snake, and more. A Sol Republic Savior of Sound, popping up at #2 on Billboard’s Next Big Sound, charting well into the Beatport Hip-Hop Top 10, and releases on Dim Mak, Ultra, CR2, and more are just naming a few of D!RTY AUD!O’s recent successes. These along with D!RTY AUD!O’s growing popularity, there is no doubt of the bright future in store for this young and talented artist.

Connor Schatzel is a musical perfectionist who mastered the guitar, piano, and drums at an early age in Arcadia, CA. To hone his skills as a producer Connor attended Icon Collective, the music production school in Burbank. He began to gain popularity as LUMBERJVCK shortly after graduating, making a cameo appearance in Borgore’s UZA music video as well as winning the EDC Chicago Discovery Project.

As LUMBERJVCK, Schatzel continued to make a name for himself by putting out some free releases on EDM.com of his filthiest trap and dubstep. These releases helped build his most dedicated followers, the “JVCKSQUAD.” As his single, “Click Clvck,” made its way around the world as a staple of Skrillex’s 2014 Mothership Tour, LUMBERJVCK was ready to start touring. 2016 was a huge year for the JVCKSQUAD. Among all of his touring, LUMBERJVCK has now gone to Australia for a tour, made his major festival debut at Beyond Wonderland in San Bernardino, played the Tacoma Dome in Seattle, stopped in Paris and Switzerland for shows, went b2b2b with 12th Planet & Protohype at EDC Las Vegas, killed Insomniac’s new event – Project Z, and sold out much of the ten year anniversary SMOG Tour with 12th Planet. LUMBERJVCK also launched Insomniac’s new record label, Bassrush Records, with support from Diplo, Bassnectar, Tommy Trash, Excision, Datsik, The Crystal Method, Downlink, Figure, Far Too Loud, Pegboard Nerds, and LAXX, among others. His other releases include Sooo Sick with 12th Planet and Virtual Riot, Old Gregg, Skinny Pigs with 12th Planet & Protohype, Stank Gum with 12th Planet, and a remix of Getter’s Suh Dude that has over 800 thousand plays.