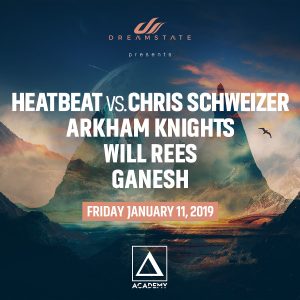 Just five short years ago, a DJ/Producer duo named Heatbeat was born out of the ranks of Argentina.  But, within such a short time of coming together, the world wouldn’t be ready for the shockwaves created by the pair’s cutting-edge productions and fresh, live DJ performances. Their versatility spans to include both their newest tracks as well as mash-ups and bootlegs of current hits, which they concoct in their studio during extensive, pre-set preparation. Backed by long-standing experience with traditional instruments like the piano, guitar and drums, today, their résumé of international acclaim and support is longer than most would care to read.
One would only need to look in the proverbial record bins of the world’s top DJs to find their “big-room” tracks waiting for the next packed venue, like the hunter waiting to spring on his prey. DJs like Paul van Dyk, Armin van Buuren, Tiesto, Markus Schulz, and Ferry Corsten, among many others, are no strangers to playing Heatbeat’s tunes day in and day out. Now, these young-bloods from Buenos Aires, Agustin Servente being only 25, and Matias Faint, 26, have set their fervent sights to only one .. Greatness. “[They] bring together influences from various genres in the form of a very explosive cocktail mix.”
Working on Armin van buuren’s label “Armada” , Heatbeat are one of the most based trance duos in the scene. With their records receiving tremendous support from the largest names and labels in electronic music, and a world- wide, debut tour on the brink, these young guys are on track to being the next big thing out of the southern hemisphere. Already Playing in the hottest places in the world such as Ibiza, Miami, Moscow, Los Angeles, Buenos Aires, Brazil, Northen Ireland, El Salvador, Peru to name a few. So, if staying ahead of the curve is part of your game, keep a steady eye on Heatbeat. Argentina.

Still at the young age of 24 years old Argentinian Chris Schweizer has the world at his feet with his trademark big bassline sound fusing the boundaries between the big room sounds and trance. Signed to the mighty Armada Music label in Holland his releases are getting support from the biggest headliners across the globe including Armin Van Buuren, Paul Van Dyk, Ferry Corsten & Gareth Emery.

His latest productions have been getting regular airplays on the worlds biggest trance radio show ‘A State Of Trance’ as well as entering the beatport trance top 5 chart!

With many more slamming productions forthcoming this year as well as major worldwide tours planned 2016 is going to be the year of Chris Schweizer!