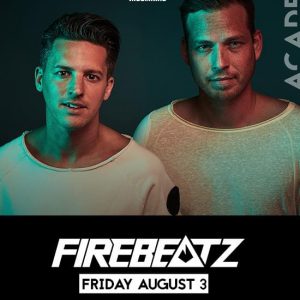 Fans have also come to anticipate their original recordings, including major tracks like ‘Dear New York’, Guitar Track’ (with Sander van Doorn), ‘Helicopter’ (with Martin Garrix), ‘I Can’t Understand’ (with Chocolate Puma), ‘Go’ and ‘Ghostchild’ (with Apster and Spree Wilson). Add to this the live Firebeatz experience – no one gets the exact same show twice. Catch them playing the Electric Daisy Carnival in Las Vegas, Beyond Wonderland in the Bay area, or the ADE Festival in Amsterdam, and you’ll get a very different party than if they’re playing a residency at Marquee in Las Vegas.

Every place they go, they meet enthused crowds, full of anticipation of what’s to come. Because a Firebeatz show is the sonic equivalent of a blow to the gut and a kick in the head. And happily pummeled fans wouldn’t have it any other way.