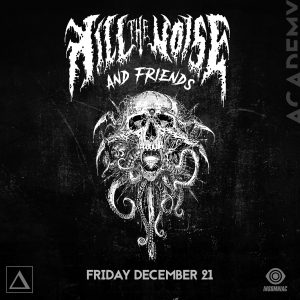 There’s a new ghoul haunting parties worldwide – a diamond-eyed, baseball-capped skull slapped to turntables, grinning off sweat-drenched t-shirts, and gleaming from 20-foot neon screens on stage. It’s the bony mascot of Kill The Noise, the buzzing young producer and DJ whose uniquely intense take on electronic dance music has kept him rocking around the globe. From packed nightclubs to sold-out festivals like HARD, Electric Daisy Carnival and Audiotistic, marking his territory every night with hypnotic, bass-heavy sets and skull stickers alike.

Amazingly, Kill The Noise has been able to leave such huge mark on his fans without a single official solo release. Yet that’s about to change in a big way with the release of his debut EP Roots, a diverse four-track collection that offers KTN a chance to show off musical influences while hinting at exciting new production frontiers. The title track is a tribal epic built on techy basslines and massive drums. “Jokes On You” is a cheeky, instantly memorable clubber featuring enormous detuned riffs and KTN’s own cut up vocals. “My World” jacks out with high-energy laser synths, while closing track “Perfect Combination” offers a infectious hook and feel-good disco vibes.

Roots is also the inaugural release on Slow Roast Records, a new imprint founded by Kill The Noise and world-champion deejay Craze, distributed by indie powerhouse Fool’s Gold. It sets the stage for future releases this year by Señor Stereo, Klever and even more from KTN and Craze themselves. So rest assured – this skull will continue to shine!