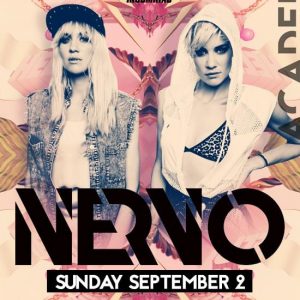 From songwriters to artists and super-fans to superstars, electronic dance music’s first sisters – Mim and Liv Nervo of NERVO – have staged a miraculous climb onto the international stage, straight from the pit in front of it.

These multi talented DJ dynamos are the all-time top-ranking female DJs in the world, voted by their legions of fans to No. 16 on DJ Magazine’s influential “Top 100 DJs” poll while continuing to rank as the top female DJ’s. In-demand and beloved across the globe, their nonstop schedule takes them from the shimmering beaches of Ibiza, to their studio in their home-away-from-hometowns of London and LA, to the towering Main Stages of the biggest festivals in the world including Tomorrowland, Lollapalooza, Creamfields, Balaton Sound, EDC, Electric Zoo, ULTRA and many more. Everywhere they go, their infectious energy, fearless personal style, and deep love and understanding for the music precedes them.

Mim and Liv’s career caught fire in 2009, when they co-wrote the the emphatic and grand global hit “When Love Takes Over” – for David Guetta and Kelly Rowland. But their journey into dance music started years prior in the festival fields of their native Australia, when as teenagers they went all-out for life-changing electronic acts like The Prodigy, Basement Jaxx, and Fatboy Slim.

“Purple hair and purple lipstick; we did it all,” says Mim. “We almost broke ribs being in the front row of the mosh pit. We were those people in the crowd for so many years, to be playing on the same bills with some of those artists now is just electrifying.”

Having cemented their songwriting prowess with a global No. 1 (plus several other songs for artists like Ke$ha, Kylie Minogue and Armin Van Buuren), NERVO set out to pursue their own career as artists, quite literally writing their own songs under their own name. Their friends and collaborators in the world showed up to support them. “We’re All No One” with Afrojack and Steve Aoki (No. 8 on the Billboard Hot Dance Club Songs chart),”The Way We See The World” with Afrojack, Dimitri Vegas and Like Mike (the official anthem of Tomorrowland 2011, which has garnered over 45 million YouTube views), “Reason” with Hook N Sling, “Something to Believe In” with Norman Doray, “Like Home” with Nicky Romero (their first No. 1 topping the Beatport chart for 3 weeks), “Turn This Love Around” with Armin Van Buuren (off the No. 1 DJ’s new album Intense): Their list of A-list collaborators is dance music’s longest and most enviable, and in a world dominated by bros, that’s one heck of a sister act. They can do it for themselves too: NERVO original “You’re Gonna Love Again” has over 17 million views and their 2013 single “Hold On” (#1 on the Billboard Club Play chart) has garnered 11 million views.  Other releases included “Not Taking This No More” (#1 on the Beatport Electro House chart). Their single titled “Revolution”, a collaboration with R3hab and Ummet Ozcan, was released on Nov 11th via Spinnin Records and has spent 3 weeks at #1 on Beatport.