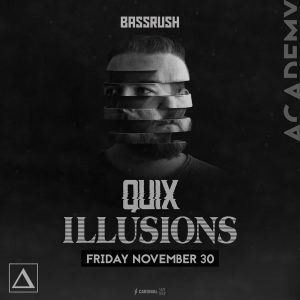 Quickly becoming the hottest thing out of New Zealand since Russell Crowe, QUIX had a massive year in 2015 and showed no signs of slowing down. 2016 has been absolutely killer from him, gaining the support from all top tier trap & bass DJs in the scene. Boasting a unique trap sound full of 808’s and wonky samples & sound design, QUIX has a style that can’t be matched, although many have tried.

Not only are QUIX’s original tracks game-changing, he has also proven his artistic versatility with collaborations with artists like Gladiator, Party Thieves, KRNE, ATLiens, Dabow, Instant Party, and Woolymammoth, not to mention the collaborations in progress with main stage superstars like UZ, Boombox Cartel, Slumberjack, Branchez, & Peking Duk.

Although he has been consistently destroying clubs & venues around Australia & New Zealand while sharing the stages of some of the best international trap/bass acts, he will soon enter the worldwide stage of coming to tour North America extensively.  With a whole stack of unreleased music up his sleeve, trust that QUIX will continue his steady explosion and won’t slow down his takeover for anything.