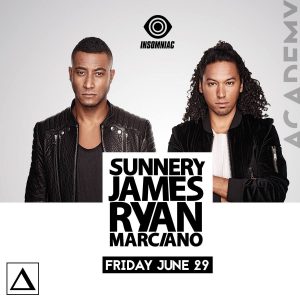 People always ask if there is something in the water in Holland that makes this tiny country churn out so many prolific and successful DJs and producers. Seems there may be some credence to this
tale because we have another pair joining the ranks of the Dutch musical super elite.

Welcome to the year of Sunnery James & Ryan Marciano!

These two guys from Amsterdam met in 2006 in the clothing store where Sunnery worked, and where Ryan applied for an internship. While working together they noticed a lot of similar interests, and started working on some music together. From that moment on the two never stopped doing what they love most and they’ve created a big name for themselves since then.

Axwell [SHM] said after playing with them in Ibiza that: “If there were a Dutch version of Swedish House Mafia, it would be Sunnery James & Ryan Marciano.” Impressive accolades for these relative
newcomers, who were plucked from their obscure retail jobs back in 2007. It seems their funky house and tribal sound struck a chord with partygoers and, after gaining popularity in their home country, these best friends took their electric energy worldwide.

Sunnery and Ryan DJ sets are becoming the stuff of legend. With hair flopping and body rockin’, there is no time to sit on the sidelines at one of their shows. They embody dance music fully, bringing the crowd to epic peaks, arms in the air and smiles all around. It’s not a genre thing, it’s a music thing, and Sunnery and Ryan convey that passion to the dance floor in a way very few artists can. See them one time and you will understand.

Breaking new ground performances that inspire and awaken the soul have brought the duo escalating successes across the globe. With their star on the rise, Sunnery and Ryan are now part of the superstar DJ set and tour circuit. Their diary reads like a massive global pilgrimage, and in a way, it is just that. A way to preach the gospel of house music, in all its vast forms, to a new generation of music lovers. From the USA to Mexico, Brazil to Guatemala, The Netherlands, The United Kingdom, Asia, Russia and all points in between, these two house music champions are breaking new ground one country at a
time.

Sunnery James & Ryan Marciano have quickly ascended into the upper echelon of dance music producers with the release of monster anthems like ‘Tribeca’ and their remake of Tiesto’s ‘Lethal Industry.’ Fans and tastemakers all have supported each Sunnery and Ryan release with the latter track being a weapon of choice for Armin van Buuren, Sander van Doorn, David Guetta and the list goes on and on. Even the don of EDM, Pete Tong made Lethal Industry his ‘Essential Selection’ not once, but twice! Steve Angello scooped up their tune ‘Markuzza’ (along with Traffic and Snitch) for his Size Records imprint realizing early on what a masterpiece it was.

Ground breaking hits lead to remix work, and Sunnery and Ryan are the go to producers for some of dance music’s most respected artists. To date the boys have reworked tracks for Sander Kleinenberg (‘This Is Our Night’), Kaskade (‘Dynasty’) and Ferry Corsten’s (‘Ain’t No Stoppin’). With recent successful tracks such as ‘Stiffness’ with Chocolate Puma, ‘Triton’ with Dubvision (also the anthem for Dance Valley 2013) and ‘Sound of The underground’, a collaboration with Nicky Romero, got to the top 3 in Beatport’s Top 100, these two prove to be on top of the dance scene. Their latest release ‘Circus’ climbed up to #12 in Beatport’s Progressive House chart and will be a guaranteed club banger this spring.

The Dutch superduo travels around the world and let huge crowds in awe. Gigs at Ultra Music Festival in Miami and Croatia, worldwide editions of Sensation, BPM Festival at Playa del Carmen in Mexico, Dance Valley and Mysteryland in homecountry The Netherlands, several Electric Daisy Carnivals, clubtours in Vegas, Chicago, New York and an own club night in club Booom on the island of Ibiza. Sunnery James & Ryan Marciano have seen it all. With a residency in world-renowned club Hakkasan in EDM mecca Las Vegas and their Essentials Mix on the highly popular radio station BBC Radio 1,
2014 is starting off big.

Sexy By Nature
In March these two hosted their first own solo show ‘Sexy by Nature’ in Amsterdam’s Heineken Music Hall. This party started on Ibiza, where the two created the concept with ALDA Events. During their club nights in Ibiza they offered a chique, elegant and seductive evening. Now it was time for a bigger venue, a bigger crowd and more Sunnery and Ryan. With funky electro and latin sounds they showed the crowd that they’re witnessing something unique. Something only these
guys can do.

Here’s where we tell you that Sunnery James & Ryan Marciano are the next big thing, headed to #1 and all that bio fluff. The thing about great artists is this, they don’t need words on paper hyping their sound because the only thing that matters is how they make you feel when they play.