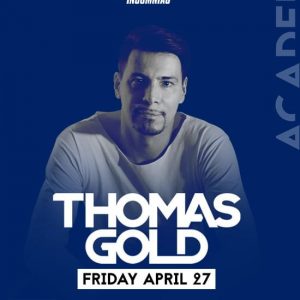 Blasting into the year of 2018 all guns blazing, Thomas Gold is increasing the intensity of his sonic firestorm. Kicking off his new ‘My House’ brand in Miami, the German pop/dance Svengali readies himself for an incredible new year and shows off his versatility across the electronic music spectrum, from racking up over 50 million streams with smash hit ‘Magic’ to making crowds plunge fully into the magnitude of his new single ‘The Middle’.

Having already shown the masses at Ultra Music Festival, Tomorrowland, Coachella and EDC Las Vegas who’s boss, Thomas again pushes his limits to turn his masterstroke live sets into peerless club/festival experiences, providing dance music fans the world over with all things essential to a mind-boggling night out. In huge demand across the globe as both a producer and DJ, Thomas sets out to make the year of 2018 the one in which he stirs up the electronic music realm even further in signature Gold fashion: with chart-topping productions, blistering live sets and a no-holds-barred approach that has already proved pivotal to his global success.