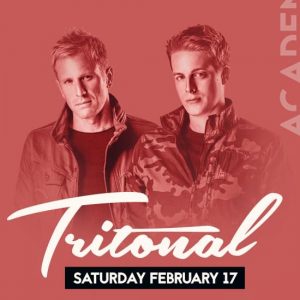 Watch a live performance by TRITONAL and you’ll understand the hype. The American production and DJ duo of Chad Cisneros and Dave Reed have firmly situated themselves as one of the most electrifying acts in the international EDM scene. Their zest for life and music is apparent to anyone who’s witnessed them in person or through their speakers and is just one reason why they resonate intensely with their loyal followers, “Tritonians.”

At the top of 2016, Tritonal released a long-coveted but previously unavailable single, “Blackout”. Featuring Steph Jones’ delicate vocals and a pop twist on the duo’s melodic sound, “Blackout” quickly became Tritonal’s fastest-selling and -streaming single to date. Its impressive success is the latest in a series of milestones for the Austin, Texas songwriters and producers.