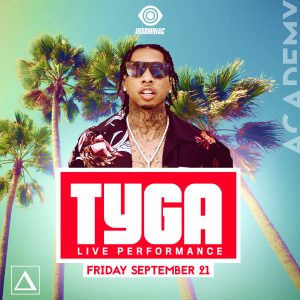 Tyga was born Michael Ray Stevenson on November 19, 1989, in Compton, California, although his Vietnamese and Jamaican parents moved him to Gardena, California around the turn of the millennium. Inspired by listening to Fabolous, Eminem, Cam’ron and other rappers, he entered rap contests with friends from school and often posted songs that he made up in online chat rooms. His cousin, Travis McCoy, was a member of Gym Class Heroes and exposed him to a lot of music. He would eventually tour with the group, all the while making underground mixtapes. McCoy got Tyga his first record deal, sharing his music with Pete Wentz of Fall Out Boy, who told MTV News: “I liked Tyga’s voice a lot and his flow. I couldn’t believe he was related to Travis, because Travis is pretty geeky.” Wentz signed him to Bat Squad records, part of his Decaydance label, and executive produced Tyga’s first album in 2008, No Introduction.