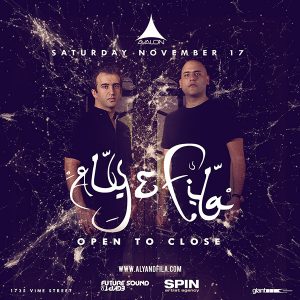 Hailing from Cairo, Egypt, the Trance duo Aly & Fila are fresh off a massive performance at Tomorrowland in Belgium and have a plethora of other headliners under their belt. Hometown heroes and national phenoms alike, Aly & Fila are one of the only music acts in the world, alongside Sting and Kylie Minogue, who have performed at one of the Great Wonders of the World – sickThe Great Pyramids of Egypt. Known for their massive singles ‘We Control The Sunlight’ and having also graced stages such as ULTRA Singapore, The Hollywood Paladium, been voted #1 DJ in the Middle Eastern Music Awards, the duo is revered as a part of one of the highest echelons of international trance.