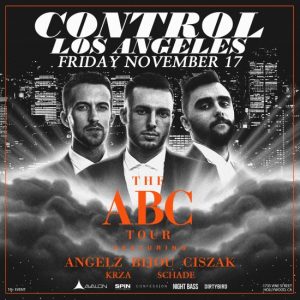 Angelz began making hip-hop and techno remixes as a 15-year-old high school student. Combining the “rawness of hip-hop with the repetition of house beats”, his innovative sounds continue to drive audiences to dance floors across the world.

Bijou hails from Pheonix, Arizona, and cemented himself as a local legend by playing hundreds of shows a year. His reputation quickly became well known throughout the country, and began playing shows from New York to Las Vegas.

Hailing from Brazil, Ciszak represents the new breed of house and tech house producers. Starting as a young musician and developing to a full time producer and DJ, Ciszak kicked off his career with a release on 303Lovers and Go Deeva. The impact was felt immediately, with both releases reaching the top of the tech house charts on Beatport.
From there, Ciszak caught the ear of one of dance music’s biggest artists, Claude Vonstroke.