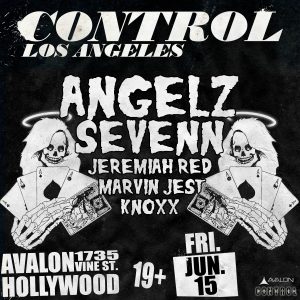 Angelz a DJ from Quebec began his career at the young age of 15. He began challenging conformity mixing house music and techno to create something completely unheard of. In 2011 his career lifted off with his track ‘Crummy Laptop” that put him in the spotlight. His latest single “Hey Girl”  released from French house master; Tchami, became an instant tech house hit. Angelz sound is all about the vibes he gives off, which is why he fuses hip-hop and hypnotic house music to create new beats that gets the dance floor moving.

In the club circuit and live performance realm, Jayceeoh has maintained premier residencies for years across the country in some of the most notable venues in the United States. He’s also been afforded the opportunity to play in over 32 countries worldwide and on some of the biggest stages, including iHeartRadio Festival in Vegas, TomorrowWorld in Atlanta, EDC Mexico, Fresh Island Fest in Croatia, Das Energi in Salt Lake City, Lights All Night in Dallas, Hellow Festival in Mexico City, and Empire Music Festival in Guatemala. Jayceeoh also headlines regularly in Las Vegas at Drai’s Nightclub, The Light Nightclub, and DayLight Pool at Mandalay Bay. As an LA native, he’s made headline appearances at Create Nightclub, Avalon, and Sound Nightclub, to name a few.

Sevenn is formed by a powerhouse duo who specializes in blending sounds of their own and creating something special. Manufacturing their own unique take on house music the duo has worked with big names such as Alok and Tiesto on their collab hit “Boom”. They continue to push extremes with their newest track “Beautiful Tonight”. Sevenn is certain to put on a show for those in attendance on Friday night.