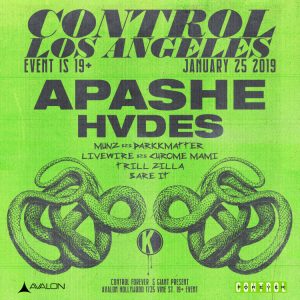 Originally from Brussels, Apashe moved out to Montreal to study electroacoustics at Concordia University. He’d always known his passion for music, but making the choice to go to university to pursue it full time truly solidified his choice in career path. In 2011, he signed to Kannibalen Records, which allowed his career to launch even further. Most recently, he released an EP titled “Requiem EP,” which earned him a Gamiq award in Quebec for Best Electro EP of the Year.

Next on the lineup is another member of the Kannibalen family – HVDES. As a Los Angeles local, she notes that she was surrounded by hip hop producers during her time at the LA Recording School. Although she took influence from hip hop and wove it into her electro house style, she made sure to stick to her own sound to produce the dark, heavy beats that she releases today. This past year, she came out strong with her debut EP “Revelations,” and if her future projects are anything like this one, the electronic music community is in for a treat.