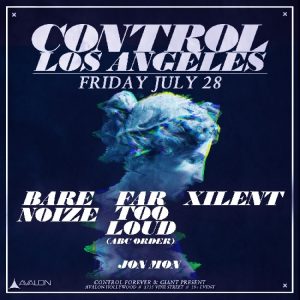 Bare Noize – Bare Noize have become some of the world’s most sought after producers since their early work in 2009. Instantly you could see that their combined multiple instrument skills, audio engineering and an ear from precision production were going to lay the foundation for them quickly becoming a formidable contender in the electronic producer scene. Their development and consistent drive for improving technique and sound quality can be seen through their initial discography. Tracks such as ‘Chucky’ 2009 and ‘Filth Lummox’ established them as one’s to watch amongst an evolving breed of producers within dub step’s more technical variant. With all eyes on the London based production duo the Foreign Beggars asked them to remix Medison feat. Skrein for their imprint Dented which led to one of the biggest Dubstep anthems of 2010 ‘Harry’. The track took Bare Noize’s profile to another level, amassing YouTube hits into the millions they gained global recognition attracting the attention of major labels as Atlantic records and Polydor and more notably a young artist, yet to release a record, by the name of Skrillex. Sharing music and production tips, a trans-Atlantic friendship emerged and collaboration developed amalgamating into Bare Noize Featuring two tracks on Skrillexs’ Scary Monsters And Nice Sprites released on DeadMau5’s Mau5trap. In 2011, with remixes for UK number one acts including Tinie Tempah, Ellie Goulding and the acclaimed Lady Gaga, the public really woke up to the Bare Noize sound. With new audiences and core fans supporting them Bare Noize release ‘Prepare To Die’ And ‘Twilight Zone’ On Borgore’s record label staying true to their ethos of premium production quality whether it be a club track production for other pop artists. Early 2012 Saw Bare Noize raise the bar linking up with former collaborator Skrillex for a free release on his OWLSA label entitled “Kill The Silence”.  With their sound developing further Bare Noize caught the attention of premier labels and artists and produced remixes from Bellasona for Ultra Records, DJ Shadow and also UK top 40 artists Drumsound and Bassline Smith on their radio hit, ‘Through The Night’. In the latter quarter 2012 Bare Noize released ‘See the Light’ on Mau5trap. The collaboration with Foreign Beggars featured on the multi million selling game FIFA 2013 and proved to be the highest selling track on the Foreign Beggar’s “Uprising” Album. As avid gamers Bare Noize were invited to Dj at the call of Duty Launch Party 4 in London, to play a special intimate party for COD4 fans and Bare Noize fans alike, further afield they enjoyed international notoriety embarking on two back to back tours with Datsik and Funtcase along side an Australian tour with Ministry of Sound and reaching some key festivals in Asia. This year Bare Noize continue to tour internationally kicking the year off appearances at SXSW and WMC in Miami.

Far Too Loud – Far Too Loud is all about hi-tech, dancefloor-destroying music that makes people throw their hands in the air and go crazy. Think high-energy, aggressive funk with big basslines and crazy edits and you’ll know the sound. Formed by Oli Cash and Dom Smart back in 2005, their sound quickly won fans and only two years later picked up ‘Best Single’ at the Breakspoll Awards. Later that year the FTL anthem ‘Play It Loud’, which saw a move from breakbeat to dirty electro-house, received a massive response and remains a crowd-pleaser to this day. 2009 saw the duo split with Dom forming techno moniker Neurodriver and Oli continuing with FTL, producing a string of electro chart-smashers including ‘Bring Back Boogie’ and ‘Megaloud’. The bass-fueled releases of 2012’s ‘Firestorm’ EP and the follow-up ‘Faster Than Light’ EP received high praise from all over the bass music scene, bursting with the now familiar big production and energy. Cementing FTL’s place in the bass music scene, these paved the way for more recent releases on heavyweight labels including OWSLA, Never Say Die, Disciple, and Monstercat, and remixes for bass-lords Zomboy, Snails and Pegboard Nerds. Well experienced in delivering unique sets packed with energy, whether it’s 200 people in a sweaty underground club or 20,000 at an outdoor festival, you can be sure it’s going to go off when FTL is in control!

Xilent – An electronic music producer residing in UK. He is best known for his track “Choose Me II”, released on May 16, 2011, which peaked at #1 spot on Beatport’s Dubstep chart and remained in the Top 5 for 3 months. The track was also selected as Zane Lowe’s “Next Hype” track on BBC Radio 1. As of recent, he is also best known for “Boss Wave”, which, among other nominations, earned him the BMA “Best Music Video” award in 2013. In 2014, Xilent has announced a full length debut album, which will be a “journey through a full spectrum of genres [he] has worked on so far”.