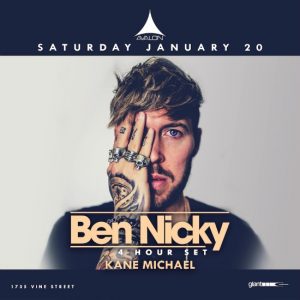 Ben Nicky is without a shadow of a doubt the stand out, record-breaking star on the global trance scene. Having catapulted himself into the limelight to transcend well beyond the genre and tattooing his mark on the scene and outselling his peers to become one of the most sought-after globe trotting artists and online celebrities, with his social media interaction and viral videos second to none! Ben’s well constructed, open format DJ sets keep his audience locked in, fusing together well known classics with current drops and sounds in his unique ‘Headf**k mashups, with plenty of twists and turns, yet making it very dance floor friendly, appealing to the masses and turning each set into a unique audio experience. Hailing from the trance scene, Ben is never content to stick to just one style having diversified his sound to cover a diverse range of styles within his sets including his ‘Headf**k Xtreme’ sets and ‘Techf**k’ sets which between them see his musical range flow from techno to trance up to the harder styles. Ben’s unique yet recognisable brand which is sported by waves of adoring fans at his shows worldwide has made him stand out from the pack with his interaction from his young excitable fanbase being one of the key contributing factors to this meteoric rise through the ranks, becoming a firm headline artist, selling out his solo shows across the globe and breaking ticket sale records in key markets worldwide from the UK to Argentina, Asia to Australia! His viral videos from these encapsulating performances rack up millions of views online, shared across all social media platforms so that he is ever present on your timeline, reminding you of the power and global reach of the Ben Nicky brand! With his diary undoubtably the busiest in the trance scene, 2017 will see Ben perform at every major festival worth its salt including Tommorrowland, EDC Las Vegas and Creamfields, as well as selling out key venues including Marquee in Sydney and Las Vegas, Avalon in Hollywood, Amnesia in Ibiza, Zouk in Kuala Lumpur and Ministry of Sound in London, not forgetting his first solo arena show at the SSE arena in Belfast Northern Ireland to over 9000 people this October! Ben has already oversold many household names to take command of new territories in the likes of Northern Ireland, Australia & Malaysia where he has become an icon to his young fanbase, bringing waves of new generations into the scene!