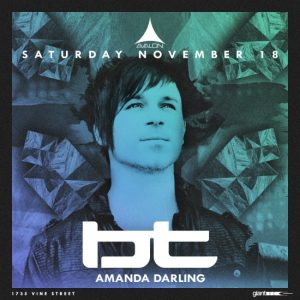 Headlining the evening is the world-renowned DJ and producer Brian Transeau, better known as BT. This Los Angeles-based trance pioneer first rose to prominence in the mid-90s, shaping the landscape of dance music in Europe. His remix of Tori Amos’s “Blue Skies” took over the British and American club scenes and made his dream house style a staple of mid-90s club music. Since then, BT has reshaped his creative approach through production work for Britney Spears and film scores for movies like Monster and The Binary Universe – a departure from this club bangers.

Trance artist Amanda Darling is known for her magical presence onstage and high energy performances. From California, USA, Amanda has touched audiences around the world with her original compositions and angelic voice. In addition to having just performed at ULTRA KOREA 2016, she has shared the stage with top DJs such as Hardwell, Judge Jules, Heatbeat and Alex M.O.R.P.H. Amanda comes from a musical theatre background. She embodies a unique character at each performance, and even inserts theatrical, singing and dance elements into her live DJ sets. Complete with elaborate costuming, each show provides a truly unique experience. Her radio show, AXION, continues to build on a monthly basis. She is preparing to release her first full length dance album in 2017, which features 12 original tracks including collaborations with legendary composer Shardad Rohani and international rock artist Alex Arndt of The Sonic Universe. Burgeoning with talent and spiritual vision for the future of dance, Amanda Darling is traveling soon to a festival near you!