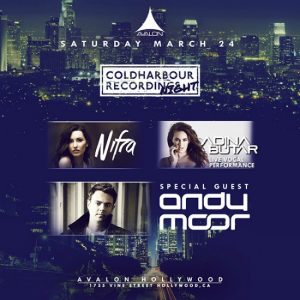 The profession of a DJ is a privileged one, with the endearing reward of connecting with others on a worldwide scale through the love of music. This feeling is shared by many on the circuit, but very few can also proudly be responsible towards the conversation that attitudes towards females in the industry are changing, and for the better.
Born in Slovakia, Nikoleta Frajkorova’s love for music blossomed at an early age, and by her mid-teens, the appetite for the electronic genre was prioritised above everything else. Her success in Slovakia garnered attention from Miami native Markus Schulz and in 2014 Nifra joined the ranks of Schulz Music Group – opening doors for her to connect and entertain audiences in North America for the first time. Her performances at Transmission in Bratislava, A state of Trance in Den Bosch, Space in Miami or Club Avalon in Los Angeles projected her as one of the leading female figures representing the dance music scene.

Romanian stunner Adina Butar has been catapulted into the EDM spotlight since recently joining Schulz Music Group (SMG) as their first female vocalist/ songwriter. Markus Schulz first introduced Adina to the world at A State of Trance 550 in Den Bosch and this became the start of her exciting career with SMG.