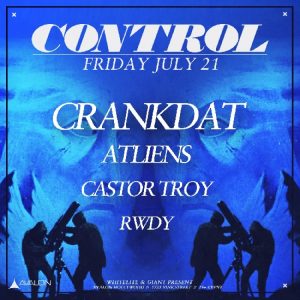 Crankdat – Crankdat is a 20 year old DJ from Cleveland, Ohio who has made his rounds through the festival circuit providing banging tracks and remixes. His sound combines trap sounds and bass music to create his unique “Cranked” sound. He intermixes huge trap drops with vibey melodies to stand out from everyone else.

ATLiens – ATliens is an anonymous production duo that has their own twist to trap music making massive anthems. They’ve created a signature chopped and screwed vocal sampling style that has garnered huge popularity in the bass music scene. They get their inspiration for their sound from their obsession with alternate realities and the underworld. It’s no surprise that they’ll get the crowd hyped with their experimental tracks.