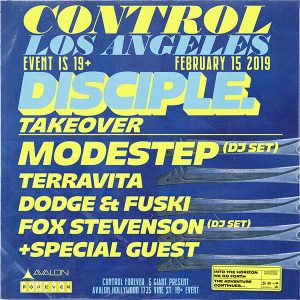 London-based crossover electronic/dubstep act Modestep formed in 2010, featuring brothers Josh (production, vocals, keyboards) and Tony Friend (production, turntables, guitar), Matthew Curtis (drums, percussion), and Nick Tsang (guitar). The quartet debuted in February 2011 with “Feel Good,” a bursting single that reached the Top Ten of the U.K. dance chart and crossed into the Top 40 of the main pop chart. August’s “Sunlight,” released on Polydor, was more aggressive — to a piercing extent — and fared even better; it peaked in the Top 20 of the pop chart as the group was plotting the release of its debut full-length. After some delays, that album, Evolution Theory, arrived in February 2013. After some touring, Curtis and Tsang departed and were replaced by Kyle Deek and Pat Lundy. The new lineup recorded London Road in a quick and productive fashion — with appearances from the likes of the Partysquad, Big Narstie, and Flowdan — and released it in May 2015.