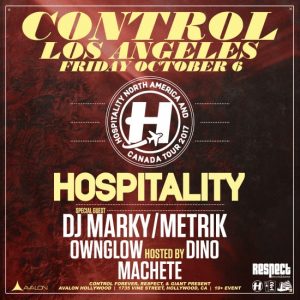 Back in 2012, the DnB mastermind won the #1 DJ in Brazil RMC Award and picked up The Personality In Brazil award from RMC the following year. While only 28 years old, DJ Marky has made a name for himself in Brazil’s clubbing and dance music capital and is set to continue his Hospital Records legacy this coming Friday night.

Metrik is signed to Hospital Records and spins euphoric DnB during his current BBC 1 Radio residency. The London based DJ has enjoyed a summer playing countless shows around the United States, New Zealand and Australia. His recent single “We Got It” out on Hospital Records received celebrated remixes from S.P.Y and Bobby Tank. Before “We Got It,” Metrik’s 2016 album LIFE/THRILLS blended pop, hip hop and numerous more genres into his quintessential DnB sound.