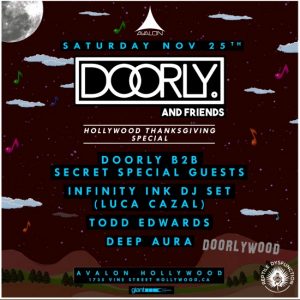 Doorly cut his teeth in his native Huddersfield, running his own party and booking the likes Armand Van Helden, Fatboy Slim, Erol Alkan, Annie Mac, 2 Many DJs and eventually Pete Tong, who was so impressed by his ability behind the decks that he offered him a Live Radio 1 Essential Mix direct from the club. Following this seal of approval, Doorly’s gig schedule took on a life of its own, with DJing in Time Square New York and touring regularly alongside Fatboy Slim just some of the highlights. At the same time as touring, Doorly was working hard honing his craft in the studio, establishing himself as a versatile, in-demand producer. Remix work for an enviable list of A-list acts followed, with imaginative reworkings of tracks from Kanye West, The Prodigy, Dizzee Rascal and Basement Jaxx setting Doorly on a different creative level to many of his peers.