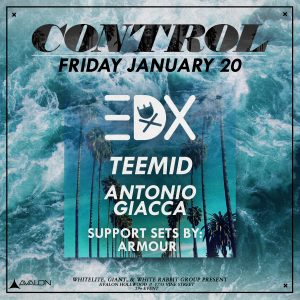 EDX – Productive and successful for more than a decade, Italian native artist, producer, DJ and multi-talent EDX first hit people’s radars in 1994 with various mix tapes that within weeks had circulated around the globe. With his new found fame EDX quickly climbed up the ladder of recognition with labels and producers asking him to sprinkle his remix magic touch onto their releases. EDX’s remix CV is impressive to say the least with remixes on the likes of Deadmau5, Mary J Blige, Bob Sinclar, Axwell, Armand van Helden, Steve Angello, Roger Sanchez, Laidback Luke, Armin van Buuren, Kool & The Gang, Kaskade, Funkagenda, Lauryn Hill, to name but a few. 2009 saw his remixes consistantly feature in the various charts such as the DMC Buzz, Cool Cuts and Beatport charts which culminated in him featuring the TOP 3 for Beatport’s Best Progressive House Artist of 2009 alongside Deadmau5 and Eric Prydz. EDX’s crazy DJ schedule has taken him around the World and back again playing to crowds in excess of 60,000 where you would hear his remixes/productions also being played by the likes of of David Guetta, Armand Van Helden, Erick Morillo, Armin van Buuren, Swedish House Mafia, Roger, Sanchez, Axwell, Deep Dish, Michael Gray, Alex Gaudino, Tiesto Etc. In 2010, EDX released hit after hit, continuously topping the Beatport charts. From original productions to remixes to massive collaborations, this past year might have been one of his most successful years yet. With a highly anticipated album on the horizon as well as numerous remixes coming up, EDX will be taking 2011 by storm with his productions. His newly launched brand, No Xcuses, has taken over the world’s FM airwaves with the No Xcuses radio show. Also launching his No Xcuses residencies worldwide, beginning with an appearance at Playhouse Hollywood, EDX will be holding No Xcuses events at some of the best clubs in the world including the amazing Space Ibiza where he will also hold a residency all summer long.

Teemid – Who is going to surprise us this year? The answer is TEEMID! A French producer, DJ and lover of deep house sounds and original vocals. His musical influences: Nu-disco, Pop and electronic sounds like Pleasurekraft, Flume, Moby, M83 or even Jay Z, Super Funk and Daft Punk for their art of sampling. After been a few years DJ in a private club, he can finally invest in professional studio equipment, and decided to create own remixes based on cover. His first cover was “The White Stripes – Seven Nation Army”, song by a young american, Holly Henry (The Voice U.S. Season 5). The second was made with Joy Tan “Gnarls Barkley – Crazy”, who got an unexpected success: #1 on Hype Machine, support from Avicii and over 1 million plays on Soundcloud. Based on this success, TEEMID will follow up with many more covers & remixes. He is already very excited to see you dancing and having fun on the dance floor.

Antonio Giacca – Los Angeles based Antonio Giacca had a great 2015, his remix of “Hey Sunshine” was the best selling remix of the year on Beatport and third best selling track overall. Antonio was also the fourth best selling artist of 2015 if you count his Beatport sales under his name and the ones under his new side project “Giacca & Flores” which dominated the Nu-Disco charts. With tracks currently signed on Spinnin Records, Atlantic Records and Enormous Tunes and a 27 dates North America bus tour alongside buddies EDX, Nora En Pure and Croatia Squad just completed, Antonio has established himself as one of the hottest house/future house artists of 2016, boosting a record breaking 8 tracks in the Beatport charts at the same time.