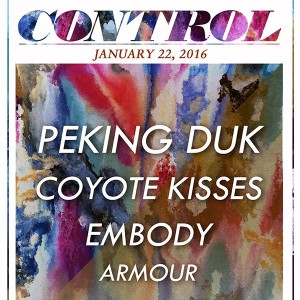 Peking Duk – Spark up an electro fuse with a twist of house, blend with a galvanizing slowed down beat, and Peking Duk is served. Catapulting onto the Australian music scene, the Canberra-bred duo of Adam Hyde and Reuben Styles has captivated fans across Australia and the world with their distinct flavour of indie electronica and electrifying live sets. Peking Duk got off to a massive start in 2015. They had the honour of having two singles in the top five of Triple J’s Hottest 100 (an amazing feat for their first entry into the countdown), completed a sold-out Peace, Love & Sweatiness regional tour of Australia, won a Rolling Stone Award for Best Video and now ‘Take Me Over’ featuring SAFIA has achieved double platinum sales. This is Peking Duk’s second single to achieve multi-platinum sales, with the ARIA Award winning ‘High’ featuring Nicole Millar recently clocking over to triple platinum! With hardly a break in their hectic touring schedule, Adam and Reuben jetted off to the U.S. in February to begin their United States of Sweat Tour including performing at the esteemed Coachella festival in California, where they played to a packed Sahara stage on the opening day of the festival. This year will see them play a bunch of overseas festivals including Lollapalooza in Chicago, Squamish in Canada, plus many more to be announced. Peking Duk also have the Australian festival circuit firmly in their grasp with appearances at Splendour in the Grass, Groovin The Moo, Field Day, Falls Festival, Big Day Out and Stereosonic, with their onstage antics attracting hundreds of thousands of hits on YouTube fan videos. ‘High’ has recently been released worldwide via RCA and Peking Duk will be releasing another single in Australia on Vicious Bitch in the coming months. Stayed tuned for more Peking Duk flavour this year.

Coyote Kisses – Forward thinking electronic outfit Coyote Kisses was bread in the swampy wetlands of central Florida, the musical brainchild of high school friends Joe Sussingham and Bryce Bresnan. The two discovered a keen creative synergy playing in various rock bands together before founding a live electronic band under the name Coyote Kisses, quickly gaining a local following due to their inherent musicianship and theatrical live performances. Today, they aim to go global, and continue to push their production into uncharted territories. Interweaving sparkling melodies with stylish fanfare, it is not difficult to see why CK has captured the hearts of so many listeners. If the innovative nature of Coyote Kisses has taught us anything thus far, it is to always expect the unexpected. After repositioning their sound, Coyote Kisses started 2015 with a series of viral originals. With multiple HypeM chart topping singles and support from the most respected dance music publications, there is no doubt that Coyote Kisses has a bright future ahead.

Embody – Embody is a Lithuanian born Producer/DJ who now resides in the peaceful bliss of Hackney, East London. He spends his days and nights stuck inside an underground bunker making music. 2014 has seen Embody release his own brand of Tropical House online. He has amassed over 4,500,000 plays online for his productions and remixes in 6 months. He received many plaudits on hipster blogs and has seen his tracks played on BBC Radio 1 in the UK . He has collaborated with AME (Duke Dumont) and Detour City (Wilkinson). His debut EP will be released by SUPER at the end of 2014. His productions have caught the attention of other artists and record labels and have seen him remix Milky Chance, Last Lynx, Lana Del Rey, Ting Tings and James amongst several others. 2015 will see Embody continuing to preview music online and through labels and Embody will bring his unique DJ style to parties all over the world. He is working on putting together a full live set to be revealed later in 2015.