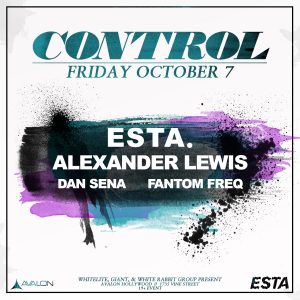 ESTA. – An open-minded and loyal supporter of all music philosophies, esta maintains zero barriers in his meticulous method of danceable, yet sexy music production and arrangement. Based in Southern California and part of the Los Angeles-based Soulection imprint, esta is a rising star within the future music ecosystem, with a loyal, globally recognized support base. In 2006, esta was introduced to the Fruity Loops music production software program by a close friend and says “my first beat took eight hours with no break in between and I’ve been hooked ever since”. Seven years and many Fruity Loops beats later, esta joined the Soulection family, moved to Los Angeles from his hometown of San Diego and subsequently began performing as a DJ/Producer around the world. In less than two years, esta reached the east coast of the U.S., Canada, Asia, Europe and remains a staple in the Southern California music scene. 2013 marked esta’s first appearances at both Coachella and the historic LOW END THEORY. Having played alongside acts like Gaslamp Killer, Sango, SOSUPERSAM, Mr. Carmack and Penthouse Penthouse, while pulling Inspiration from artists like Hudson Mohawke, Dilla, Cory Henry, 9th Wonder, Taylor McFerrin, M-Phases, D’Angelo, and Just Blaze, esta seamlessly fuses multi-dimensional genres into an atmospheric swing. In 2015, esta released his etc. remix EP and continued his grueling touring schedule, with notable appearances at Circo, Applesap, Decibel and HARD Fest.

Dan Sena – Dan Sena has devoted his life to music, being raised in a family of creative minds–his grandfather the poet Jorge de Sena was his first artistic inspiration early on. At age six Dan began playing piano, and from there he played in countless bands and musical acts pushing the legacy of his family’s name. Dan, being one of the newest additions to the Dim Mak Roster, his history with Dim Mak goes far back to a band called Stickfigurecarousel, a band that became the catalyst for Dim Mak Records. Steve Aoki and Dan have been friends since 1994, with a mutual passion for music driving them, pushing them to the forefront of the Los Angeles music scene in two different genres of music. With Steve’s encouragement, Dan expanded his musical talent to the electronic dance market, soon to become one of the top performers in the Southern California DJ Circuit. Over the last few years Dan has been DJing nationally, producing remixes for the likes of Datarock, N.A.S.A, The Yeah Yeah Yeah’s, Sonny Moore, Scanners, and most recently with hip hop legend “Del The Funky Homosapien”, the list just keeps growing with no end in sight.