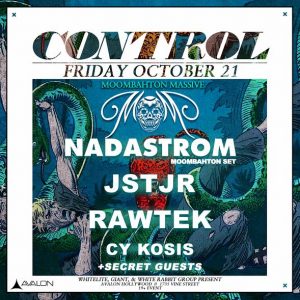 Nadastrom – The D.C.-born, L.A.-based duo Nadastrom come from different backgrounds, but share a ravenous appetite for extremes. From producing genre bending club anthems to house & techno groovers, Dave and Matt have been praised in the pages of Spin and Rolling Stone, pumped on the airwaves of BBC Radio 1 and NPR, and revered at nightclubs and festivals across the planet. Nadastrom’s sound has never been lacking in creativity. In 2007 when they first signed to Dave “Switch” Taylor’s Dubsided imprint, their debut EP “Pussy” immediately rose to the top of the Beatport charts. Along with pioneering the fusion genre Moombahton in 2009, they’ve remixed, produced and toured with some of the biggest names in music including Skrillex, M.I.A. and Kid Cudi. In 2010, the duo relocated from their hometown of WashingtonD.C. to Los Angeles, treading new sonic ground and finding comfort in fresh surroundings. Their adventurous DJ sets and productions landed them regular invites to world-renowned L.A. club institutions such as The Do-Over, Low End Theory, and A Club Called Rhonda. They’ve even hosted and curated several stages and events for Hard’s Day Of The Dead and Holy Ship! festivals. Nadastrom’s most recent output explores a stronger, more refined melodic house sound, while maintaining their original style and influences. This is most notable in their 2015 self-titled debut album on L.A. label Friends Of Friends & Dubsided. During its release, Nadastrom broke the top electronic albums chart on iTunes and was praised in influential media outlets such as Pitchfork and Resident Advisor. LA Weekly called it one of the “Best L.A. Albums of 2015” while Entertainment Weekly described it as “boundary breaking with an unexpected pop edge.” With a near decade of consistent touring, releases, and accolades under their belt, Nadastrom continue to move crowds and dance floors worldwide. And through their signature style and exploration in dance music and club culture, Dave and Matt manage to keep audiences anticipating their every move.

JSTJR – JSTJR’s music is best represented by imagery and emotion rather than derivative subgenres and labels. Walk into the most thumping nightclubs and sweaty, wall-shaking basements from Lisbon to Los Angeles to Lima and you’ll understand the 24-year-old producer’s global sound that has earned him official releases on dance music’s top labels including Mad Decent, Fool’s Gold, and SMOG. Hailed as the US ambassador of Buraka Som Sistema’s zouk bass movement in America, the New England native has forged a love for regional sounds from around the world with his inherent tendencies for hip hop and experimental electronic production. This unique, hybrid and inclusive approach to dance music in a growingly homogenous market has earned him nods from an elite group of producers including Skrillex, A-Trak, and Diplo – the last of whom JSTJR worked with directly as a credited artist on Major Lazer’s Peace Is The Mission in 2015.

Rawtek – Rawtek is a Los Angeles based duo consisting of Levi and Daniel. With influence from two worlds, Rawtek takes the raw organic sounds of indigenous cultures and unites them with the technical synthetic music of today’s world. This is Lionsound.