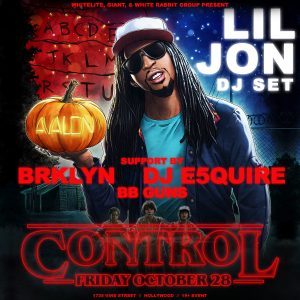 Lil Jon – After gaining knowledge of the Southern hip-hop scene at So So Def, Lil Jon began his career as a performer. He was one of the originators of a style called “crunk,” a Southern-based offshoot of hip-hop that combines drum-machine beats, electronic-keyboard melodies and vocal chants. As the lead rapper of the group Lil Jon & The Eastside Boyz, he released the debut single “Who You Wit” in 1997. This hit was followed by the album Get Crunk, Who U Wit: Da Album, the first of six albums that Lil Jon & The Eastside Boyz released together. The group’s first nationally played single was 2001’s “Bia’ Bia’,” which featured appearances by Ludacris and other well-known musicians. Their following hit singles included “Get Low” (a collaboration with fellow Atlanta rappers Ying Yang Twins) in 2003, “What U Gon’ Do” in 2004 and “Give It All U Got” in 2009.

BRKLYN – Unity makes strength. Cameron Alexander and Cody Nadeau are BRKLYN. Based out of Los Angeles, CA, BRKLYN combines live instrumentation, cinematic drums, resonating top line vocal melodies and aggressive synthesizers to create BYKLYN’s distinct emotional style. Most recently, BRKLYN has worked with Rick Nowels (Lana Del Rey, Ellie Goulding), S1 (Kanye West, Eminem), Cosmic Gate and Maor Levi. BRKLYN can be seen incorporating live guitars and other instrumentation to complement their high energy live sets. BRKLYN is releasing 4 highly anticipated tracks this summer, which will firmly instill BRKLYN on the scene as one of the ones to watch in 2015. Drawing inspiration from their eclectic background, they invite listeners to experience the BRKLYN journey.

DJ E5QUIRE – Hailing from Brooklyn, NY, DJ Esquire has 20+ years of DJ experience consisting of radio shows, live DJ performances, various club and lounge residencies and countless competitions across the USA, Canada and Europe. DJ Esquire is a 2x DMC USA Champion and was nominated for 2014 “Turntablist Of The Year at the Global Spin Awards. He finished in the Top 5 at the 2013 DMC World DJ Finals in London this past October. He’s also the 2012 DMC USA Battle for Supremacy Champion and 2012 IDA USA Champion. He proudly represented the USA at the 2013 DMC World DJ Finals in London placing in the top 5, at the 2012 DMC World DJ Finals placing top 4 in the world, and at the 2012 IDA World Finals in Poland in December placing 6th. Esquire is endorsed by Reloop DJ and Ortofon, and is also one of the premiere Corporate Event DJs in NYC with events for MTV, HBO, Maxim Magazine, Details Magazine, Saks, Macys, and Lucky Shops under his belt. During his time on the road, Esquire has performed on the same bill with acts such as Jay-Z, Coldplay, Run-DMC, Kanye West, Metallica, Pearl Jam, and DJ Tiesto just to name a few. Spanning his 13 year DJ battle career, DJ Esquire is a 5X National DJ Champion with title wins in DMC, ITF, IDA and Gong DJ Battle competitions. Esquire has also secured a teaching slot with Scratch DJ Academy where he teaches aspiring tablists the art of DJing. Back in 2004, Esquire grossed over $15,000 in cash and prizes from his battle victories and performed dates on the SXSW (South by South West) Festival. In the summer of 2005, Esquire traveled and per- formed with the Mountain Dew And 1 Mixtape Tour spanning 30 cities and returned in 2006 for another 25 city stint. Esquire also starred in a Toyota Yaris commercial ad that was shown across the U.S. Recently, Esquire made an appearance on VH1’s reality show “The Gossip Game” and completed 3 successful European tours, performing at various club/ lounge/performance dates in Denmark, Sweden, Germany, Croatia, Hungary and Poland.