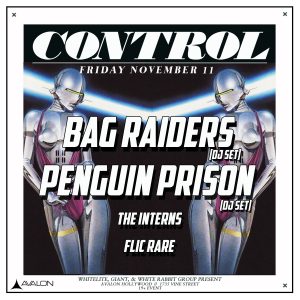 Bag Raiders – “Fun Punch”, the lead single from the Bag Raiders EP, was resolutely flogged by all those in the know and landed the duo on “best of 2007” lists and compilations galore. The Power Rangers inspired film clip received over 700,000 views on YouTube! The Raiders then forward-rolled into 2008 with the release of a second EP on the Bang Gang label, “Turbo Love”. The giddy, synthesizer heroics of the title track saw it become one of the year’s most played songs on Triple J, Australia’s foremost national radio station. The Australian “Turbo Love” tour was followed by shows in Brazil, New York and, later, Japan, which propelled the Bag Raiders into the international arena. In between these whirlwind tours the boys debuted their live show “Bag To The Future” – re-workings of original tracks and remixes replete with live guitar, keyboards, percussion, bells and whistles – as part of the Fuzzy Parklife tour. The shows received such an overwhelming crowd response that the Raiders were invited back to do it all again for tens of thousands of screaming party kids at the legendary Shore Thing and Field Day parties to bring in the new year. Soon after that they played the opening night of the 2009 Sydney Festival alongside A-Trak, Santogold, DJ Mehdi and Busy P. And all this on the back of only two singles! Looking forward, the Bag Raiders 2009 diary is already jam-packed with a record due on A-Trak and Catchdubs’ “Fool’s Gold” label in America and a “Turbo Love Remixes” release soon after. What’s more, the boys will also begin work on a full-length album to be released in the second half of the year (some interesting collaborations are already in the works) and have shows locked in for Brazil, Mexico, the US and, later, a tour of Europe. What else? Bag Raiders have done a slew of remixes. From Sneaky Sound System to Kid Sister, Headman, the Midnight Juggernauts and K.I.M. (featured in the infamous Grand Theft Auto IV video game), Muscles, ZZZ, the Lost Valentinos and more. Most recently their re-working of Cut Copy’s “Far Away” (which the band called one of the best remixes they’d ever had done) was released as part of the Bang Gang deejay’s “D is for Disco, E is for Dancing” compilation. The Baggies have already proved themselves as consummate mixtape pros handling the duties on FBI Radio’s “It’s the Beat” compilation and have garnered a rep for notoriously balling DJ sets alongside the likes of Boys Noize, Radioclit, Sinden, Surkin, Guns ‘n’ Bombs and Tittsworth, to name a few. Only into their third full year as an outfit and they’ve already accomplished all this! But really they’ve just begun. So join them on their journey to infinity and beyond……
[soundcloud url=”https://api.soundcloud.com/users/874293″ params=”auto_play=false&hide_related=false&show_comments=true&show_user=true&show_reposts=false&visual=true” width=”100%” height=”450″ iframe=”true” /]

Penguin Prison – On Lost In New York, the new full-length album from producer/singer-songwriter/DJ Penguin Prison (aka Christopher Glover) the hustle and bustle of the city comes alive. From the vintage glam of NYC’s storied disco heyday, all the way through to the bohemian rhapsody of modern Brooklyn, Lost In New York is a cultural time-capsule dedicated to the greatest city on the planet as told via Glover’s intimate storytelling and personal brand of electropop. The presence and energy of the city are undeniable on Lost In New York, Glover’s love letter to his home, his muse, and the main character in his album’s story arch. But bubbling beneath the surface of this urban romance is the sense of bewilderment and disorientation that even native New Yorkers sometimes feel. “I was born and raised in New York, and it’s always been seen as a place for creative misfits to find their place amongst each other,” says Glover. “But I’ve seen it change before my eyes into a playground for the one percent… I sometimes feel lost in the city I was born.” It’s a theme Glover holds near and dear to his heart and best heard on album track “Calling Out,” the first single off Lost In New York. Written with electronic production duo Oliver, the song features children’s shouts, distorted guitars, and punctuated vintage synths reminiscent of classic Hall & Oates. “The song is about not knowing which direction to go, but somehow always coming back to that one person who has been there for you the whole time,” says Glover. In the case of “Calling Out,” whether person or place, Glover finds solace in song, and his emotion-driven vocals are proof. In “Show Me The Way,” written with fellow producer RAC, Glover continues the theme. The song’s title and heartfelt lyrics bear it all: “Sometimes I just want someone to tell me where to go and what I should do,” says Glover. Written in one day at RAC’s studio in Portland, the passionate and punchy “Show Me The Way” takes the best elements of electronic, dance, and rock and effortlessly blends them, making listeners dance one minute and jump in the mosh pit the next.
[soundcloud url=”https://api.soundcloud.com/users/748233″ params=”auto_play=false&hide_related=false&show_comments=true&show_user=true&show_reposts=false&visual=true” width=”100%” height=”450″ iframe=”true” /]