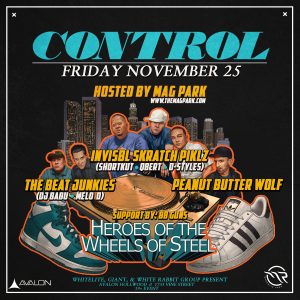 Invisibl Skratch Piklz – The Invisibl Skratch Piklz were a rotating crew of hip-hop DJs whose tactile acrobatics were more accurately served by the term (coined by Piklz founder DJ Q-Bert) “turntablist.” A quintet (although their lineup shifted constantly), the group’s core consisted of Q-Bert (Rich Quitevis), “Mixmaster Mike” Schwartz, and Shortkut (J. Cruz), with newcomers D-Styles and Yoga Frog replacing founding member DJ Disk (Lou Quintanilla) in 1996. Individually and as a group, the Piklz’s reputation in the hip-hop underground is undisputed, and journos get a kick out of describing how they were asked by the world’s most prestigious international DJ association (DMC) to stop competing since they were discouraging other DJs from even bothering to enter.

The Beat Junkies – Along with the Invisibl Skratch Piklz and the X-Ecutioners, the Beat Junkies were one of the seminal DJ crews that revived the art of turntablism (i.e., using turntables as musical instruments in and of themselves) during the ’90s. Distinguished by their multicultural membership and trademark Green Lantern rings, the Beat Junkies were formed in Orange County (outside Los Angeles) in 1992 by J-Rocc (born Jason Jackson). Fellow core DJs Rhettmatic (born Nazareth Nizra) and Melo-D (born David Mendoza) were joined by charter members Curse, Icy Ice, Symphony, and DJ What?!. Other crew members came onboard within the next year, including core DJ Babu (born Chris Oroc) and two future members of the Invisibl Skratch Piklz, Shortkut and D-Styles, plus Havikk and Tommy Gun. Mr. Choc completed the crew upon his arrival in 1995. That year, the Beat Junkies got their own radio show in the suburb of Santa Ana, and began testing their skill regularly on the DJ battle circuit around southern California. The core quartet of J-Rocc, Babu, Rhettmatic, and Melo-D all won individual titles at various levels of competition, and as a team, the Beat Junkies won the ITF (International Turntable Federation) world team championships in both 1997 and 1998, after which they collectively retired from competition.