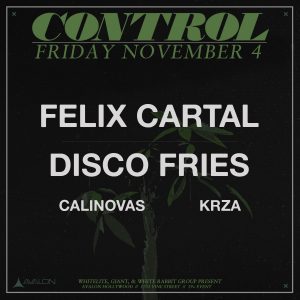 Felix Catal – Associated with Dim Mak Records, Felix Cartal is a Canadian electro-house producer who creates buzzing, energetic dance tracks aimed squarely at the dancefloor, but he also has a soft, sentimental side, as evidenced by the many love-themed songs he’s recorded with female vocalists. Cartal fuses his punk roots with his love for club culture, enlisting guest vocalists from bands such as Death from Above 1979 and the Blood Brothers for his tracks. Hailing from Vancouver, British Columbia, Canada, he initially established himself with remixes of Moving Units’ “Crash ‘n’ Burn Victims” and Dragonette’s “Take It Like a Man” in 2007, not to mention unofficial remixes of MSTRKRFT, Britney Spears, Ashlee Simpson, and others that circulated in the music blogosphere. Steve Aoki signed Cartal to Dim Mak in 2009 and released his debut EP, Skeleton, in May of that year. Later that same year he was featured on the label sampler Dim Mak Dance Compilation, Vol. 1: Evolution. Cartal made his full-length album debut the following year with Popular Music. “Volcano,” featuring vocals by Johnny Whitney of the Blood Brothers, was released as a single. Meanwhile, Cartal increasingly established himself as a DJ, touring the North American club and festival scenes and releasing freely downloadable mixes on the Internet. Cartal continued to release a stream of singles and EPs, often featuring guest vocalists. Second album Different Faces appeared in 2012, including the single “Tonight,” featuring Maja Ivarsson of Swedish band the Sounds. Cartal began 2013 by releasing “The Alarm,” a collaboration with Autoerotique, and later released an EP called Past Present Felix, in addition to remixing tracks by Zedd and Bloody Beetroots. In 2014 he released the EP Credits, as well as another collaboration with Autoerotique, “Heat.” The singles “With You” (featuring Natalie Angiuli) and “Something to Live For” (featuring Nikki Yanofsky) saw release in 2015. ~ Jason Birchmeier, Rovi
[soundcloud url=”https://api.soundcloud.com/users/45715″ params=”auto_play=false&hide_related=false&show_comments=true&show_user=true&show_reposts=false&visual=true” width=”100%” height=”450″ iframe=”true” /]

Disco Fries – Disco Fries have achieved that difficult thing – they have had both commercial success on a large scale, yet still retain underground credibility. The American duo are unique in modern dance, then, and have risen from the dorms rooms of Berkley College of Music to graduate to playing headline shows at world leading clubs like EDC Las Vegas. Made up of Nick Ditri and Danny Boselovic, Disco Fries have a bass heavy sound that takes influence from many different genres but sounds like nothing else. Classic melodies also characterise their anthemic hits, and support regularly comes in from the big name likes of Kaskade, Diplo, Steve Aoki, and Hardwell as well as press like MTV and Rolling Stone. The legendary Tiesto signed the pair to his label Musical Freedom, then they started their own Liftoff Recordings. It takes in new music, a radio show and a passion for bringing through the next generation of dance icons. The pair have also lent their writing skills to Krewella’s Live For The Night and Tiësto’s fifth studio album, A Town Called Paradise, which spawned a single which went platinum in the US. Their own first EP autonomous came on their own label, before being picked up by Polydor and Universal and then getting three million plays on Spotify. Many more singles have flowed such as ‘Stars Come Out’ and ‘We Are One’ and their radio show now regularly gets more than one million listeners around the world. Always pushing on, this dance duo still have much more to give.