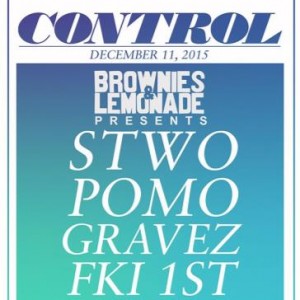 STWO – STWO is a 21-year-old producer from Paris, France. Only starting to release tracks in 2013, he has grabbed the attention of millions of fans with his most recent EP ‘Beyond’ featuring “Lovin U”, and his debut EP ‘Moans’. Signed to label Huh What & Where alongside the likes of Kaytranada, his musical style of smooth future garage bass lines, soulfully pitched vocals and 808-inspired beats places him perfectly in the majestic bass movement du jour.

POMO – Pomo is a Canadian multi-instrumentalist and producer living in Vancouver, BC, Canada. Growing up in Port Moody, BC, he matured through the Vancouver music scene, introducing himself to various elements of music. After moving eastward to Montreal in 2012 for a couple of years, Pomo has hit his stride in the electronic dance music market, joining the likes of Kaytranada, Ta-Ku, and Stwo on the HW&W roster. Drawing from various influences, Pomo makes an effort to distance himself from genre-defining elements while approaching his music from an organic and raw songwriting perspective. Using elements from hip hop, electronic, and 70s/80s funk, the multifaceted producer likes to draw people in with the malleable dynamics of his music, something that attracts himself to artists like J Dilla, Prince, Disclosure, and the emerging EDM scene as a whole.

Gravez – After accumulating over 4,000,000 plays within a time span of four months, 22-year old Atlanta-based rising producer Gravez has made a name for himself with reinterpreting music from the likes of Drake, Jaden Smith, Travis Scott, Rae Sremmurd, The Weeknd, Justin Bieber, Goldlink and much more. With his futuristic and artful style, you can expect the young and rising Atlanta native to expand his repertoire to much bigger things in 2015. Gravez has continuously provided stellar back to back releases whose sounds have accumulated the attention of collectives such as Soulection and HW&W Recordings as well as being featured on Hypetrak, Diplo & Friends, BBC Radio, Okayfuture, Hillydilly, DoAndroidsDance, Earmilk, Pigeons & Planes, Indieshuffle, Complex, DJ Booth, AshleyOutrageous and more.

FKI 1st – Atlanta based production team/hip hop artists, FKi is known for creating heavy bass, trapstep and edm inspired hits for industry heavyweights like Tyga, Iggy Azalea, T.I., Juicy J, YG and Jeremih. The two led a 12 city tour early 2013, The Certified Trap Tour, powered by Livemixtapes and Mad Decent to promote the trapstep genre as well as the artists and DJs that pioneer the trend. FKi’s sound is a heterogeneous blend of glitch hop, hip hop, drum and bass – trap music making it difficult to limit their fan base or genre of artist you may hear over an FKi production. This sound was first heard heavily on FKi’s premier mixtape Transformers in the Hood. TNTH, presented by international DJ and Mad Decent curator, Diplo, garnered much deserved attention from electronic, hip hop, and trap music forums throughout the US and abroad.
From engineering to executive producing, FKi went on to produce Iggy Azalea’s entire Trap Gold EP in 2012 and DJed her European tour. FKi also collaborated with producers like Israeli dubstep producer Borgore, Flosstradamus, The Jackie Boyz, The Invisible Men and Diplo to name a few.