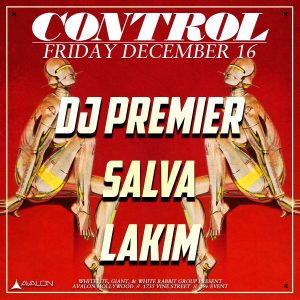 DJ Premier – Christopher E. Martin (born March 21, 1966), better known as DJ Premier (or Primo by his fans, fellow musicians, and critics), is a prominent American hip hop producer and DJ, and the instrumental half of the duos Gang Starr and PRhyme. Contrary to popular belief, he did not found nor even co-found Gang Starr. He was introduced to DJing while attending school at Prairie View A&M in Houston, Texas. DJ Premier’s original stage name was Waxmaster C, the “C” taken from his first name, Chris, although he had already changed it to DJ Premier at the time he joined Gang Starr. Outside of Gang Starr, some of Premier’s most lauded work is his collaborations with Jeru the Damaja and Group Home. With the former, Premier crafted one of the East Coast’s landmark albums in the form of The Sun Rises in the East, released in 1994. Their follow up to this, 1996’s Wrath of the Math, was regarded as a solid effort but not on par with its predecessor, although it did contain Jeru’s biggest hit to date, “Ya Playin’ Yaself”. Group Home’s Livin’ Proof (1995), although greatly overlooked at the time of its release, has eventually come to be critically acclaimed. In 1994, DJ Premier collaborated extensively with jazz musician Branford Marsalis’s experimental group, Buckshot Lefonque, for their debut album. During the making of music video director, Hype Williams’ 1998 film, Belly, DJ Premier collaborated with neo soul leader D’Angelo for a song called “Devil’s Pie”, which was originally intended only for the film’s accompanying soundtrack. However D’Angelo soon changed his mind and decided to include the song on his sophomore album Voodoo (2000) In 2006 he co-produced Christina Aguilera’s Back To Basics album.

Salva – A versatile solo producer, crowd riling DJ, owner of the revered Frite Nite label and key Figurein the Friends of Friends collective, Paul Salva knows how to control a room. After dropping one of 2012’s biggest tracks, a collaborative remix of Kanye West’s “Mercy” that not only reached #1 on Soundcloud, but received spins on Power 106 FM (LA), Power 105 FM (NYC), and Shade45XM, Salva’s work promotes complexity through a synthesis of contrasting styles, showcasing dips into house motifs, grooves in smooth boogie funk, and massive roiling bass waves that has garnered support from the likes of Pitchfork, FADER, FACT, BBC’s Benji B and Skream & Benga, A Trak, Low End Theory, Snoop Dogg, Diplo, Dâm-Funk, Night Slugs, and many others. A Chicago native who developed his craft in San Francisco and currently resides in Los Angeles, Salva has been invited to perform on the world’s biggest stages. A 2011 alum of the Red Bull Music Academy, 2012 has seen Salva perform at Sonar, Coachella, Lollapalooza, Mutek Montreal, Detroit Electronic Music Festival, SXSW, The Do Over LA, Boiler Room, Low End Theory, and many others, while touring alongside Nguzunguzu, Shlohmo, Pearson Sound, and B2Bs with Machinedrum. Aside from his live performances, Salva hones his production talents as one of the cornerstones of the Friends of Friends label alongside Shlohmo, Mexicans With Guns and Groundislava. His 2011 debut full-length, ‘Complex Housing’ and ‘Yellobone’ EP both received critical acclaim (Pitchfork, FADER, FACT, and others), leading him to exclusive mixes for Mary Anne Hobbs, The FADER, and XLR8R, while being asked to remix the likes of Miguel Migs, Glitch Mob, Rainbow Arabia, Om Unit and others.