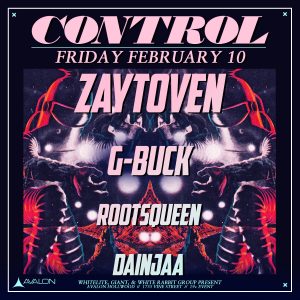 Zaytoven – Digital “Ro” Dope Manager for Cassius Jay and Zaytoven. Contact me for beats and production from us. We also own Digital Dope Radio, Meet The Djs, Meet The Producers, and Table Mannerz Djs

G-Buck – Philadelphia-based G-Buck definitely bucks the artificial boundaries imposed by genre. His skills as a producer and DJ/turntablist give him a flexibility with his art-form that makes him a complete package for top-tier success. G-Buck has tracks on OWSLA, Mad Decent/Jeffrees, Main Course, DimMak, Circus Records With support by the likes of Skrillex, Diplo, Flux Pavilion, Bro Safari, A-Trak, DJ Snake, UZ, Munchi, & TJR – G-Buck has merely been testing the waters with his variety of stellar productions.

Rootsqueen – Don’t let the pretty face fool you. Dj RootsQueen is a skilled turntablist, producer, strip club dj, radio show host, and selecta based out of Atlanta, Ga. Originally from Tampa, Florida, she began spinning Drum and Bass at 17 years old which catapulted her into mastering Hip Hop, Dancehall, Dub Reggae, House, and Classic sets. As Konkrete Jungle Alumnus, she first toured in the South East under the Alias “Dj Manga”. As Drum and Bass started to fade, she became obsessed with Dub Music and toured the East Coast with reggae bands such as One Drop, Rocksteady @8 and Third World. A band member dubbed her “RootsQueen” one night at a show, and it stuck. In 2006, She became Dinco D’s (Leaders Of The New School) tour dj. While gigging in Florida, she asked to join the Reggae Sound System in her hometown, Poison Dart International Sound. They said yes and she has been a member ever since, thus plugging her name into the forefront amongst the West Indian Dj community. In 2011, she joined Coast 2 Coast Djs and began the grueling climb up the urban dj market, in which she found a niche djing fashion shows, salons, boutiques, and showcases, as well as club and industry events which put her in place to Dj for Young Jeezy’s Gourmet Footwear launch. The affiliation with Young Jeezy led to trade show residencies and celebrity sponsorships through No Stress Gear, Fresh Phamily, Publik Trust, and many others. Around the same time, an industry executive scouted her for Dj Clue’s “Desert Storm Radio” which manifested the brand “Rude Girl Radio”, an award winning celebrity studded radio show produced entirely by Dj RootsQueen herself. “Rude Girl Radio” caught the eye of celebrity super producer, Drumma Boy. He put her on the roster for Drum Squad Dj’s and made her his personal dj for his fashion line “Fresh Phamily” and his Sparkling Wine “Moreno BLHV”. Most notably, he plugged her for resident day shift dj at one of the most legendary and notorious strip clubs in Atlanta, Club Silhouette (formerly Kamal’s 21 and Platinum 21). It wasn’t long before she was recruited into Coalition Djs, the most influential, record breaking dj crew in America. Radio Invasion (Dj Symphony – Wu Tang Clan) had previously asked her if she would be interested in another online radio show, and now that she had a crew of djs to help with the workload, she obliged, thus creating Coalition Radio with the world famous Dj Funky.