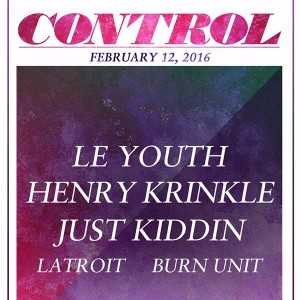 Le Youth – 90s sounds refracted through a thoroughly modern aesthetic. Tracks that are serious about moving a dance floor full of people without coming on too strong. Breezy California vibes touched by a twist of European flair and an air of mystery. This is what Le Youth is about. Wes James is the slightly enigmatic Angeleno behind Le Youth, a producer without a past whose music is steeped in it. His signature sound is a blend of Clinton-era R&B and the house music that was lighting up dancefloors and radio stations around the globe during the same period, and the leisurely grooves, airy synthesizers, and pop hooks of a song like his debut single “C O O L” that can easily pull a listener back to the pre-millennial, pre-Internet days when dance music offered a transcendentally blissful brand of hedonism that’s considerably harder to find on today’s macho-tinged EDM landscape. Viewers of the video for “C O O L” (directed by Renata Raksha) who know their 90s music will likely pick up on the influence of a number of cultural touchstones from the time: chart-topping crossover club acts like Technotronic and Black Box, house divas like Robin S. and CeCe Peniston, and R&B icons like Aaliyah and Ginuwine, as well as a visual sensibility that evokes Herb Ritts in his role as video director to the decade’s biggest pop superstars. It’s got retro style while maintaining completely contemporary feel that’s free from gimmicks and offers stylishly relaxed relief from the ongoing onslaught of dayglo-tinged bass music and big room EDM.

Henry Krinkle – Henry Krinkle originates from Florida but is currently residing in China, introducing a new sound to the Shanghai night life. Championing a new sound blossoming somewhere between the swamps and polo fields of South Florida. Henry Krinkle found his calling perfecting the sounds of UK post-dubstep and future house with innovative flair. Taking cues from artists like James Blake. Henry Krinkle is creating a new sound in modern electronic dance music. ‘Stay’ has crept it’s way across the blogs amassing an impressive 7 Million hits in under a year. The music has a viral life force and it’s just the start for HK. Henry has performed everywhere from impromptu Philadelphia rooftop parties to big rooms in Miami opening for bass legends such as Mount Kimbie, Goth-Trad and Silkie. His project has support from up and coming producers such as XXYYXX, Karma Kid, Sumsun, Kastle and Cyril Hahn. Pete Tong and Rob Da Bank are early supporters at Radio. Henry will be joining the line up at Bestival with a headline slot.

Just Kiddin – Hailing from the small market town of Kettering, Northamptonshire, Just Kiddin have placed no limitations on their sound. Having already gained props from industry heavy weights such as Duke Dumont, Tensnake, Gorgon City and The Magician, the last 18 months have been nothing short of defining for this on-form UK duo. Having grown up together from a young age, Lewis and Laurie have created a unique production recipe that is firmly focused on the art of creating organics, multi-dimensional music. Drawing on their experiences as musicians – Laurie playing the drums, and Lewis playing guitar – their productions start from simple grooves that slowly introduce the warm and addictive melodies that the boys have become so known for. 2013 saw Just Kiddin make their introduction via Nurvous Records with the ‘Intimacy’ EP. Their follow up release ‘Time, Space & Honey’ came on Ministry Of Sound’s underground imprint HK Records. The online support was overwhelming with features on Clash, Noisey, Sub Soul, Topman CTRL and Eton Messy, which saw Just Kiddin starting to play shows around the UK alongside acts such as Bohdi, Second City, Leftwing & Kody and Cause & Effect. Coming from a musical and DJ background, their club performances have also brought rapturous acclaim. Breaking the mould of the laborious bedroom producer turn DJ – Just Kiddin are a welcomed breath of fresh air behind the booth, bringing charisma, energy and faultless tune selection at any given time of the night. Such skills have won them numerous plaudits from promoters and clubbers a like, showing signs that they have what it takes to take centre stage.