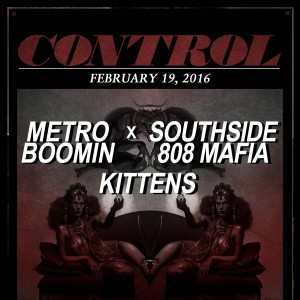 Metro Boomin – Also known as Metro Beatz or simply Metro, producer Metro Boomin is the man behind many hip-hop hits, including the massive “Jumpman” from Drake and Future. Born Leland Wayne is St. Louis, Missouri, Metro Boomin moved to Atlanta to shop his demos and beats, eventually hooking up with MC OJ Da Juiceman. A couple beats were sold to rapper Gucci Mane and he soon became an upper level producer, earning credits on releases from ILoveMakonnen, Yo Gotti, and Wiz Khalifa, along with numerous tracks from Future. In 2013, he dropped his debut album, 19 & Boomin, and in 2015, his work on Drake and Future’s “Jumpman” helped the single become a smash hit. ~ David Jeffries, Rovi

Southside 808 Mafia – Southside grew up in Atlanta, Georgia. He started making beats when he was 14 years old, when he got his first computer. He was later discovered by rapper Waka Flocka Flame, who signed him to his label 1017 Brick Squad Records. There, he met Lex Luger, who was another producer for Waka Flocka, and the two started working together. Southside’s first major release was the song “Fuck the Club Up,” which appeared on Waka Flocka’s debut album Flockaveli. In 2011, Southside co-produced the track “Illest Motherfucker Alive,” from Kanye West & Jay-Z’s critically acclaimed album “Watch the Throne”. This helped to boost his career and bring him into the mainstream. He has since worked with artists such as Rick Ross, B.o.B, Wale, Meek Mill, Lil Scrappy, MGK among others. Southside was the main producer of Gucci Mane & Waka Flocka’s collaboration album Ferrari Boyz and on Flocka’s sophomore album “Triple F Life: Friends, Fans & Family”. He cites Lil Jon as his favorite producer and is a fan of Pharrell, Shawty Redd, and Drumma Boy and is also inspired by Kanye West, Dr. Dre and Swizz Beatz.

Kittens – It takes an equal part talent, finesse, sass, and balls for a woman to get the right kind of attention in the ever competitive industry of young DJs and producers…Kittens has just that. With her vast knowledge of music and past as a dancer, Kittens (born Lauren Abedini) has been able to find a balance between low grinding electronic beats, heavy rap, and future beat music which has earned the support of some of the most influential artists of our time; including longtime mentor, Usher, Kid Cudi, whom she supported on his 2013 tour, Skrillex, Gaslampkiller, Salva, and A-trak who has her signed to his record label Fool’s Gold as well as championed her in every facet of her career. Mixmag and The Hundreds have named her as a “Rising Producer/DJ Shaping the LA Club Scene”. She has made countless “Top Female DJ” lists and Source Magazines ’25 Women To Watch’ as well as being mentioned as one of Los Angeles’ major players by Thump. Her aggressive style of DJing, made through quick cuts inspired by her foundation as a hip hop DJ and harder track selections often leave people pleasantly shocked to find she is not as soft and fluffy as her name might suggest. Kittens is also member of LA collective, Athletixx, along with Hoodboi, Falcons, and Promnite who are pioneering the sound and have coined the term “LA Club” with their eclectic but heavy hitting alternative club music. When she’s not out DJing or working on music, you can bet Kittens is either building her cat army, napping, eating Oreos, or teaching one of her Girls Only DJ workshops.