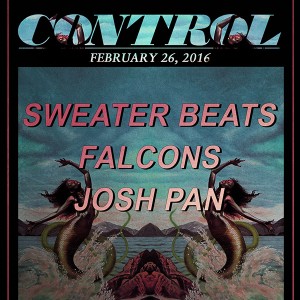 Sweater Beats – Sweater Beats is the production alias of Filipino music maker Antonio Cuna. Since the premiere of his debut single “Mlln Dllr” on the Annie Mac show, Sweater Beats has captivated audiences around the world with his unique blend of dance music and R&B, garnering features in Billboard and Entertainment Weekly, and multiple performances on BBC Radio 1 and Boiler Room. Last year Cuna performed shows across the world including two North America tours with Chance the Rapper, and Chet Faker. Recently Sweater Beats offered his Cloud City EP for free download via LA imprint Huh What & Where, and supplied official remixes to Flume and Alesso.

Josh Pan – Up until February 12th, Josh Pan was just another young up and coming producer struggling to make it in the electronic music world. Pan released his first track a year ago and has consistently dropped standout songs ever since. Josh Pan was increasingly gaining popularity for his impeccable production and relaxed vibes. His most recent track “Nectar” even gained Skrillex’s public support, and his take on Kanye’s “Touch the Sky” gained over 100,000 views on Soundcloud. On February 12th, however, Josh Pan dropped the bombshell. Josh’s musical output is creatively expansive, leading a handful of fans on social platforms to quasi-jokingly refer to him as the next Diplo. Is there some truth to that? We’ll know in time. But one thing is for certain, josh pan’s ever-growing catalog of impressive music is making a valid case for a success story in the making.