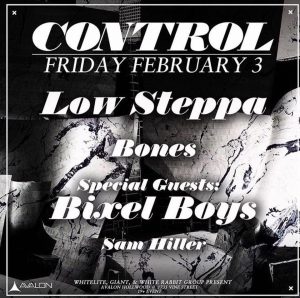 Low Steppa – Low Steppa needs little introduction. Since the early years of this millennium he’s been producing some of the finest bass music around under various guises, whilst touring the globe and rocking some of the world’s best parties – from EDC in Los Angeles to Womb in Tokyo. His own imprint Simma Black Records is going from strength to strength, with Simma Black releases becoming a staple in many a DJs crate, and with his own Simma parties packing clubbers in. As well as his solo productions, through several aliases and collab projects like Twocker, Rudi Stakker, Bass Weazal, Dreadstemz, Punk Rolla, Will Bailey, Low Steppa remains very much at the forefront of the bass music scene, with his productions gaining support from some of the industry’s biggest names including Kenny Dope, Todd Terry, Joris Voorn, Amine Edge & Dance, Huxley and Shadow Child. On top of which, recent radio support has come from the likes of Mista Jam, Cameo, Target, B Traits, Toddla T, Zane Lowe, Kissy Sellout and the Wideboys. With a constant flow of releases and remixes coming, as well as a solid calendar of touring, Low Steppa will be stepping things up yet another level…

Bones – For almost a decade, Trevor Moffitt aka BONES has helped strengthen the electronic music scene in Los Angeles while spreading his sound to cities far and wide. Sharing the stage with the biggest names worldwide, BONES has developed an infectious fusion of house, future, garage, deep, and techno. His unique and eclectic styles have earned him performances at ELECTRIC DAISY CARNIVAL, HARD SUMMER, HOLY SHIP!, NOCTURNAL WONDERLAND, SNOWBALL, SNOWGLOBE, SXSW and WMC. In part to founding one of the most influential electronic music outlets in the world, Gotta Dance Dirty™, he also helps manage the event/label NIGHT BASS with AC Slater, and was named head of A&R in the U.S. for Sweat It Out! Records alongside Sinden and Yolanda Be Cool.

Bixel Boys – The underdog mentality that has kept a chip on Bixel Boys’ shoulder might soon be a thing of the past. After playing an array of what can be loosely defined as ‘dance’ tunes at mega festivals like Electric Daisy Carnival Las Vegas (Twice), HARD Summer, Something Wicked and IleSoniq as well as headlining some of the worlds best clubs such as Exchange and Sound (LA), The Mid (Chicago), Webster Hall, Verboten, Slake (NYC), and Grand Central (Miami). They have also done featured mixes for Thump’s MIXED BY, Nina Las Vegas’s Triple J mix, Discobelle, Nest HQ and Power 106’s Powertools. When they touched down for an Australian tour as complete celebrities, they knew it was time to shed the underdog mentality and strive for something bigger. Witnessed through their diverse releases on labels like Sweat It Out!, Armada, Dim Mak, Main Course, and Nervous, Bixel Boys have dabbled in everything from experimental bass music to bouncy house jams, along with 70’s rock, 90’s hip hop and Berlin techno. With support from A-Trak, Fedde Le Grand, RL Grime, TJR, MakJ, Treasure Fingers, The Crystal Method, What So Not, as well as an iconoclastic mantra, #FREELIFE, as the backbone of their movement, Bixel Boys are not only a force behind the decks and in the studio, but also in the community.