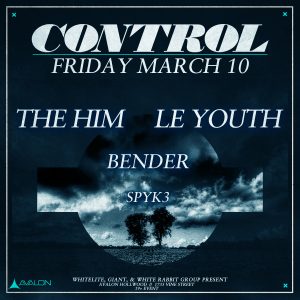 The Him – Hailing from Amsterdam, The Him is a music production duo (aka Jeroen & Steven) creating buzz with their smash hit singles, official remixes and monthly Midnight Mixtapes. Gaining inspiration from artists like Daft Punk, Duke Dumont, Empire of the Sun and The Chemical Brothers, The Him’s sound is an infectious union of indie, deep house, nu disco and pop – full of fresh, experimental and sometimes tropical beats bound to make you move and wanting more. With an exclusive premiere on Dancing Astronaut, their latest single “Feels Like Home” quickly hit #1 on SoundCloud’s Deep House chart, went viral on Spotify, claimed #4 on DMC’s Buzz chart and garnered more than 3 million plays in only one month on their SoundCloud page. The single, featuring the smooth vocals of up-and-comer Son Mieux, continues to attract international attention from magazines, bloggers and fans alike, with interviews and special mentions from EDM Sauce, Your EDM, DJ Mag NL, MrSuicideSheep, EDMTunes and countless more. Heralded as a “Dutch masterpiece” by radio 538 legend Wessel van Diepen, “Feels Like Home” is the 3rd official single from The Him, after two chart-topping collaborations with famed DJ/music producer Sam Feldt. In addition to their singles , Jeroen and Steven have also dropped official remixes for the likes of The ChainSmokers, Otto Knows, Shift K3y, Shaun Frank, Adrian Lux, Solomon Grey, and Dotan. Their Midnight Mixtapes, featuring the latest deep house tracks – including their own – continue to grow each month. With over 90,000 avid followers on SoundCloud, amassing millions of plays, The Him is also supported and played by the some of the world’s biggest DJs including: Tiësto, Felix Jaehn, Oliver Heldens, Don Diablo, The Chainsmokers, Sam Feldt, and more. Cementing their position in the dance music scene and blossoming in their creations, The Him are most certainly artists to keep an eye on over the next year.

Le Youth – 90s sounds refracted through a thoroughly modern aesthetic. Tracks that are serious about moving a dance floor full of people without coming on too strong. Breezy California vibes touched by a twist of European flair. Wes James is the artist behind Le Youth. Song’s like “C O O L, Dance With Me, and R E A L” pull a listener back to the pre­millennial, pre­Internet days when dance music offered a transcendentally blissful brand of hedonism that’s harder to find in today’s macho­tinged EDM landscape. Le Youth has attracted the attention of taste­making dance music bloggers and DJ’s the world over, and his music has continued to impress with each successive release and well­received remixes for the likes of Disclosure, Sam Smith, Katy Perry, Sia, RAC, Jess Glynne, Tensnake, and Chromeo. Le Youth is continuing his hot streak in 2016 with new hits on the horizon.