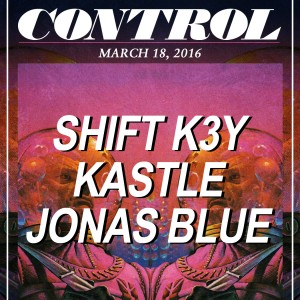 Shift K3y – A London kid through and through – born, raised and living in the city for all his 19 years thus far… An early adopter to the trade of a musician, in part due to his musical family but convinced it was in his blood anyway. Lewis ’Shift K3Y’ Jankel started playing around on the piano at an pretty early age ‘it was there in the house so it was just natural for me’, a keen musical ear lead to experimenting with a few other instruments to try and find his grounding as a musician. ‘I ended up at the Bass guitar at around 8 years old, played a variety of funk, soul, jazz etc, lots of elaborate bass sections. I still play bass now which probably explains what drew me towards production and the sound I have’. The exciting chemistry of what makes up this young talent are the chords of another kind too, vocal chords that is, ‘Singing has always been a love of mine my whole life but I really started taking that seriously in my last year at school’ the soul full vocals that bless many of his track including the bomb ‘Let You Down’ are testament to a broad appreciation of musical styles. ‘At the age of around 11 years old my Dad purchased a copy of Logic 5 and I started messing around remaking songs I liked and I quickly realized I had a love for everything Bass Heavy – a lot of House, Garage, 2-step, Hip-hop, Crunk, Industrial Folk Step of-course’. It was at 16 that Music and its potential vocation fully manifested itself in Shift K3Y and the point where he really started refining his armory of Bass talent and skill for an infectious melody and started studying composition and harmony whilst at school. ‘I was really focused at this time, trying to learn as much as I could about mixing down and mastering to improve my production’.

Kastle – Originally part of a small crop of American artists inspired by dubstep, garage, grime, jungle and other ‘nuum sounds, Kastle has transitioned through multiple aesthetic iterations since he burst into the popular consciousness 6+ years ago, fostering a thriving touring career, releasing a critically and commercially successful debut album, and heading up his own wildly successful label. Across several releases on his own Symbols label, the Los Angeles-resident has filtered hip hop and R&B through the aforementioned UK sounds, developing a sound rife with pop consciousness and a keen sense of melody, all while retaining a strong devotion to under-the-radar sounds. In between playing festivals like Coachella, Decibel, Lightning In A Bottle and Burning Man, it’s remarkable that Kastle has had time for any other creative pursuits, but along with his own trailblazing production work, he also functions as an A&R, mixtape curator and tastemaker DJ. The rare musician with the fan base and clout to regularly play massive festivals and, at the same time, develop a visceral connection to the young artists that are likely to take the proverbial torch in the coming years. At Symbols, avant garde releases aren’t the exception, but the rule and the label is now made up of a deep, diverse group of producers pushing American and UK sounds forward at a blistering pace.

Jonas Blue – Born and raised in London, producer Jonas Blue has so far taken the music industry by storm, implementing his musical cues in all of his undertakings. From pop to classic dance music, as well as delving into elements of tropical house – its clear to see that he has cleverly crafted a sound which fills the void that so many are craving from the UK music scene. His debut release ‘Fast Car’ features the incredible young vocal talent, Dakota. The song itself came about when he had the idea to recreate one of his mother’s favourite songs that he remembered hearing on repeat as a child. Crafting the music came naturally to him but the difficult part was finding a voice who had the richness and depth that made the original so special – of which Dakota certainly brought to the forefront of the record. With the record itself already a certified global smash and having spent time collaborating in studios in L.A, Stockholm and London – Jonas Blue is fully equipped and ready to launch himself into a lifelong career in music.