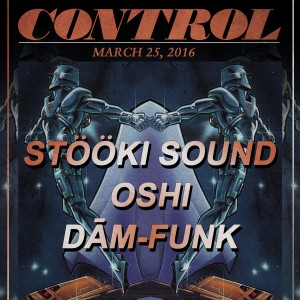 Stooki Sound – Stööki Sound is one of the three elements of Stööki (Sound, Vision, & Play). Stööki Sound is DJ Lukey and Jelacee. The London-based duo has made its career on pushing boundaries within the bass music scene by staying true to their love of UK Grime. Early on, they collaborated with like-minded producers like Mr.Carmack and Hucci to create “Uppers” and “Ball So Hard,” two of the most iconic songs in the Trap scene today. In the past year they have smashed through tours all over the world, satiating the needs of their worldwide fan base. They’ve gone from successful headlining runs in the U.S., to touring with Dillon Francis in the U.K. and selling out 100% of their shows in Australia. They are now setting their sights on a world tour in 2016. More focused than ever, nothing can stop the Stooki Movement.

Oshi – This 17 year old London based producer has taken the game by storm, seamlessly breaking out into the scene and rising from 300 to 45k soundcloud followers in a matter of months. As co-founder of the rising Film Noir collective and with support from Soulection, HW&W and more, Oshi continues to keep everyone on their toes with unique and forward thinking productions that are unlike anything else in music right now.

Dam – Funk – One-man band, producer, and DJ Damon Riddick, known as self-termed “modern funk” artist Dâm-Funk (“Dâm” is pronounced “Dame”) grew up an only child in Pasadena, California and was infatuated with a range of music throughout his childhood, including heavy progressive rock, synth pop, and funk. He took to synthesizers above all other instruments and laid down his first home-made tracks during high school. Shortly after graduation, Riddick became a familiar face in Los Angeles recording studios, first with Double Action Theatre, a New Jack Swing act guided by maverick producer Leon Sylvers III (the Sylvers, Solar Records). For the bulk of the next ten years, Riddick’s session gigs were mostly on rap records, including AllFrumTha i’s self-titled album, Master P’s I Got the Hook Up, and MC Eiht’s Tha8t’z Gangsta. Riddick officially stepped out as Dâm-Funk in 2007, when he remixed Baron Zen’s cover of the Gap Band’s “Burn Rubber.” This forged an alliance with Peanut Butter Wolf’s Stones Throw label. Within a matter of weeks, Dâm-Funk was also on the label’s compilation for 2KSports, 2K8: BBall Zombie War. In 2008, he released “Burgundy City,” a 12″ single that affirmed his m.o.: synth-funk, mostly instrumental, that put a modern, off-center spin on late-’70s/early-’80s funk and post-disco giants like Roger Troutman (Zapp, solo), Kleeer, Parliament/Funkadelic, and Mtume. He was not afraid to let those inspirations be known, either. As a DJ at his L.A.-area club night, dubbed Funkmosphere, he let the crowds know what he was spinning, proud to go against the common DJ practice of maintaining secrecy. After stockpiling hours of material recorded by himself in his garage, he put together Toeachizown, a five-volume LP series released across 2009 that was slightly whittled down for a two-CD set issued that October. By that point, he had also wooed some indie rockers with his remix of Animal Collective’s “Summertime Clothes.” Tracks recorded from 1988 through 1992 were compiled for Adolescent Funk, released in 2010. Although several years passed before the proper follow-up to Toeachizown, Riddick was productive, with remixes, EPs, and singles — including a cover of Donnie & Joe Emerson’s “Baby,” recorded with Ariel Pink, and “I Don’t Wanna Be a Star!” — as well as a number of collaborations. Toward the end of 2013 alone, album-length projects with funk legend Steve Arrington and rap veteran Snoop Dogg (aka Snoopzilla) were released, respectively, as Higher and 7 Days of Funk. In 2015, he backed Todd Rundgren — one of his longtime inspirations — during a spring U.S. tour in support of the album Global. As the dates were wrapping up that June, an instrumental four-track Dâm-Funk EP titled STFU was released as a prelude to the album Invite the Light. ~ Andy Kellman, Rovi