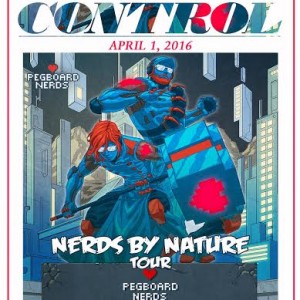 Pegboard Nerds – The Pegboard Nerds, comprised of the veteran producers Michael Parsberg and Alex Odden, have exploded on the scene in 2015 with an infectious energy that has captivated the new college generation. Since joining forces in 2004, Parsberg and Odden have accumulated hundreds of millions of plays online and developed a loyfal following among their fanbase dubbed #NerdNation. After Billboard tabbed the duo a “must-see act,” their recent work has esteemed DJ veterans from Rob Swire to Steve Aoki raving about their style and production genius. Their cartoon alter-egos and trademark pixelated hearts are the beloved symbols of the rising act, transforming them from ordinary DJ’s into an iconic brand. With upcoming releases featuring surprising collaborators, the Pegboard Nerds are here to wreck havoc in the dance music community.

Madeaux – Madeaux is causing quite a stir with his debut EP New Wav, out September 4 via Fool’s Gold Records. The pseudonym for Miami-born, L.A.-based artist Andrew Berman, Madeaux has developed a reputation in the electronic community for his ever-evolving and uncompromising innovation. This promise was recognized early, when at age 19, as a college sophomore with only a year of production experience under his belt, he was selected as one of five producers from across North America to participate in Joel Zimmerman’s (deadmau5) inaugural mau5hax project, to collaborate with Joel and his mau5trap label contemporaries during the 2012 Winter Music Conference in Miami. Now, just three years later, Madeaux is a Slush Management client, alongside celebrated artists including Porter Robinson, Mat Zo, The M Machine and Matt Lange, as well as a recently signed producer with Fool’s Gold Records under global dance music tastemaker, A-Trak. Madeaux’s musical evolution is a story of unremitting reinvention. Berman first appeared on the scene in 2011 as part of the DJ/production duo, “Shapes of Light.” Specializing in thunderous, atmospheric electro and techno, Berman and collaborator Nicolas Russo-Larsson were selected by EDC’s Discovery Project to play EDC Orlando in the fall of 2012. However, growing uninspired with the uniformity of commercial EDM, Berman changed course, eventually channeling his full energy into exploring the experimental corners of electronic R&B and future bass under a new name: Madeaux.

Grabbitz – It’s 2015, and we’re at a crossroads in electronic music. At a time when fans worldwide have become bored with monotonous beats, preprogrammed performances, and robotic artists, Grabbitz comes through with a fresh take on production and sound. Leading a new wave of producers breaking away from the cookie cutter mold expected from the dance music world, Grabbitz has carved his own lane, he’s found his unique voice, and he’s established a genuine style best heard on his forthcoming Better With Time EP. On Better With Time, the multifaceted, Los Angeles-based producer/songwriter/performer expands his musical horizon, while at the same time challenges the status quo within the current EDM landscape. As a follow-up to Friends, his debut EP, Better With Time sees Grabbitz, née Nick Chiari, explore his production palate and diversify his songwriting prowess. What results is a seven-track release, which plays out less like an album and more like a mini-movie. Complete with an intro and an intermission, Better With Time ebbs and flows with cinematic compositions filled with grace, deep human emotion, and passionate artistry. Designed to be ingested from beginning to end, each song on Better With Time seamlessly weaves into the next like an intricately architected web to create a true listening experience rarely found in electronic music today.