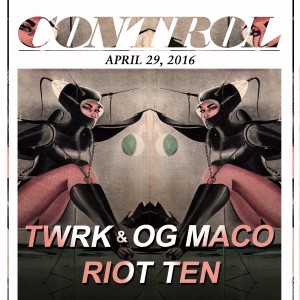 TWRK – The kings of the mid tempo jams, T W R K, were a mystery before Diplo outed their true identities on-air during their first Diplo & Friends show on BBC Radio 1xtra.  The duo of Benzi and Esentrik hit the scene crushing dance floors from strip clubs, to frat houses, to the main stages of festivals by cranking out dance floor massives, including their global break out “BaDinga” (even Skrillex has his own dance to this one!). Their signature sound has everyone knocking down their door for remixes including Major Lazer, Jason Derulo, Naughty Boy & Wiz Kalifa, A-Trak’s project Low Pros, and even Diplo himself who’s “Biggie Bounce” (TWRK Remix) popped up in the Hollywood blockbuster “Lets Be Cops”.  Them T-W-R-K boys have held down a year long residency on BBC Radio 1xtra, toured the globe playing major nightclubs and festivals, dropped their debut self-titled EP, via MAD DECENT. Upcoming single with OG Maco coming out on Capitol Records.

OG Maco –  Bringing the slurry, slanted sound of Mystikal into the age of cloud-rap, Atlanta rapper OG Maco burst on the scene in 2014 with the single “U Guessed It.” Angered by his sound engineer and some bad service at a restaurant that offered both voluptuous women and chicken wings, OG Maco improvised most of “U Guessed It” in the studio while the tape rolled. The aggressive track caught fire as soon as it was uploaded to the net in 2014, then the track “FUCKEMx3” appeared with the Atlanta crew Migos as guests. A remix of “U Guessed It” featuring 2 Chainz landed by the end of the year along with the solo and more subdued track “Sheesh.”

Riot Ten – Born and raised in El Paso, Texas, Riot Ten (Christopher Wilson) is exploding into the world of electronic dance music. Originating as a Hip Hop producer at the age of 15, Chris’ music has evolved into a unique blend of the Trap and Electro genres. Featured on top music blogs sites such as Smash The Club, Digi Love, EDM Sauce, Trapstyle, Trap Sounds and Fist In The Air, Riot Ten is gaining momentum from coast to coast. Chris was recently featured on the Sirius Satellite Radio station “Electric Area”, and aims to continue his growth as a music producer. Riot Ten has recently received support from A$ap Ferg, who has been in contact with him in regards to a collaboration for originals and official remixes. Other supporters include: Flux Pavilion, Caked Up, Kennedy Jones, Victor Niglio, Dirty Audio, Migos, and many more. Join the movement as Riot Ten takes over the scene.