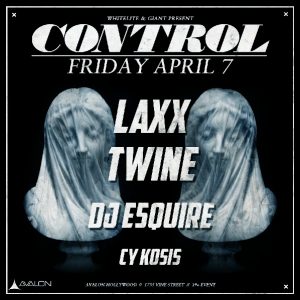 Laxx – Since (quite literally) stepping up to take the spotlight last year, LAXX aka James Churchill has been widely received as the next hottest thing in electronic music. His multi- dimensional sound is slicing through the monochrome array of dance music, leaving a gap for his unique sound to take centre stage. Upon making such a huge impact with his debut release, LAXX is simply teasing the world with what is next in his quest for dance music domination. Originally Oxford-based, James has absorbed the bright lights and culture of the capital and moved on to much bigger things. Graduating from University with a degree in film, television and music, his original soundtracks also became an instant success, winning awards around the UK and Europe at the key major film festivals. Since the iconic ‘Step One’ was released through the powerhouse platform Never Say Die Records at the start of 2014, (previous artists to have released on the label include SKisM, Skrillex and Foreign Beggars), the bass scene hasn’t been the same. LAXX has already gained a cult following and status most key players would be lucky to reach in their lifetime, with this only being the start of his journey. ‘Step One’ and follow up EP ‘Step Two’ have fused a perfect balance between underground and mainstream and broken down genre barriers to bring in something current, with a futuristic edge. His sound screams class and exuberance, surrounded by a trademark raw and uncompromising groove. Taking elements from US hip-hop and UK underground music scenes, LAXX creates and delivers something innovative and exciting. The biggest note struck is within his American fan base, whose music tastes are undeniably some of the hardest to crack in the world. Fans instantly clocked on to his explosive sound, raising his profile enormously across the States. Now with 3 hit releases in the space of 3 months alongside a handful of high profile remixes, LAXX is a key player in the popular music scene, with a lot more to come. ‘Step Three’ is still yet to come and this vastly talented man is showing he isn’t planning on slowing down anytime soon. No boundaries will be left untouched and no music genre is safe from his astounding creativity; LAXX is quite simply taking the music world by storm.

Twine – Twine combine samples, digitally generated tones, and processed instruments into an electronic mix that defies easy categorization. Though they share certain sonic signifiers with laptop artists like Autechre (the use of glitches and digital mistakes, extensive DSP processing), Twine seem to focus more on composition than sound generation or atmosphere, resulting in tracks with a pronounced cinematic bent. Twine’s Greg Malcolm and Chad Mossholder started making music together in high school in Cleveland, OH. Though they dabbled in punk rock, a shared interest in industrial music pulled the friends toward electronics. The group was a trio for a short time after forming at Kent State University in 1997, but Twine ultimately became Malcolm and Mossholder’s project. Both have studied computers and technology formally. Mossholder pays rent as a sound designer for a video game company in Boulder, CO, while Malcolm works as an audio engineer in Cleveland. The pair collaborate by exchanging tapes and sound files through the mail and across the Internet.